Ford Nation: Will it rev up Toronto Tories?

Ford Nation is alive and well at City Hall but pundits say Toronto's Conservative faction may not be strong enough to help shift the political tides in Ottawa.

With the federal election just weeks away on May 2, Conservatives have been keeping a close eye on Toronto and the rest of the GTA as an area where the party can gain more seats.

An extra seat in the GTA is key to help the Conservatives land a majority government in parliament. Much attention has been given to hotly contested seats in Brampton, Mississauga and Vaughan, where the Tories are likely to make gains.

But some political watchers believe the Liberals could face trouble right here in Toronto, a city that has been a Liberal fortress -- on both the provincial and federal level-- for years.

Eglinton-Lawrence, Don Valley West and East and of course the Etobicoke ridings (the crux of Ford Nation) are where the leaders are hoping for change.

During the 2008 election, the Conservatives came close in both Eglinton-Lawrence and Don Valley West but if Ford Nation were to be put to the test, it would have to be in Etobicoke where Toronto Mayor Rob Ford and his brother Coun. Doug Ford live and thus rule the local political roost.

"To have Doug Ford's support is really a huge boost to this campaign," Opitz said in a news release following the event. "His family is a political institution in this community and I really appreciate their endorsement of my campaign."

Prime Minister Stephen Harper is expected to make a personal appearance in the riding Thursday night.

Opitz, a Lieutenant-Colonel in the Canadian military and senior advisor to Immigration Minister Jason Kenney, is facing off against long-time incumbent Borys Wrzesnewskyj.

Wrzesnewskyj won handily in the 2008, extending the riding's Liberal legacy. The riding has been Liberal since 1993 when Allan Rock won the seat after decades of Conservative rule.

Polls have shown the Conservatives have gained support in ethnic communities across the country.

The ethnic vote has been particularly important in Eglinton-Lawrence where Joe Volpe has consistently received the support of the riding's large Jewish and Italian communities.

But this time, the incumbent -- who has served the riding since 1988 -- may see a decrease in that support.

In 2008, Conservative candidate Joe Oliver lost to Volpe by a little more than 2,000 votes. This time, the race is expected to be even closer.

"This riding is accessible (to the Tories) and is on the target list," said Nik Nanos, a Canadian pollster who has been tracking party support for CP24 every day since the election was called.

Ford's message of putting taxpayers first has resonated with citizens from all walks of life, Nanos said. Even if people have had past misgivings about Prime Minister Stephen Harper and his government, they might just put it behind them.

"Money is a hot button issue," he said. "The Conservatives have a similar message of managing tax dollars.

Volpe, for his part, said he's confident everyone in his community will support him and the work he's put into the riding for the past 23 years.

He said people need to take a closer look at the Conservatives policies on issues that matter to the ethnic communities.

"Anyone who stops to take a look is realizing reality is a lot different," he said.

He blasted the Harper government for losing their bid for a seat on the UN Security Council.

"He lost the seat precisely when Israel, their friend, needed a strong voice at the Security Council table."

Volpe said the Conservatives haven't been able to cinch the ethnic vote in the past simply because many Liberals understand immigration issues first hand.

"We don't have an ethnic strategy because we live that every day," said the Italian-born MP. "We're not the "other guys" even though that's how the conservatives have labeled us."

The Conservatives' popularity in the GTA has prompted one organization to put up a website to inform people on how to strategically vote against the party.

"This used to be a safe Liberal seat now under serious threat from the Conservatives," the site says. "It is a two-way contest with the Greens and New Democrats far back. A classic vote-split riding. If the Liberals can pull this out, it will be by a few hundred votes. Backing Liberal Yasmin Ratansi may prevent a Conservative pickup."

The site expects a similar close race in Don Valley West where incumbent Rob Oliphant will go against Conservative rival John Carmichael. While the Greens and NDP have support in the riding, Project Democracy warns that vote-splitting would hand this seat over to the Tories.

Both Don Valley ridings and Eglinton-Lawrence voted for Rob Ford in the 2010 municipal election.

Dan Robertson, a top campaign strategist for the Conservatives, agreed the party is "competitive" in the city.

He refused to discuss campaign strategies or particular races in the city but said the Conservatives have done a lot over the last few years to warrant support in Toronto.

He pointed to the party's ongoing commitment to the gas tax and other infrastructure investments as one example of why Torontonians are warming up to the Conservative party.

"The Conservative government has made a lot of investments that have been good for cities and Toronto," he said. "They're important stimulus projects for job growth and it has laid an important groundwork for future growth."

He also accused the Liberals of taking the support of both Toronto and its ethnic communities for granted.

"(We have support) not because we feel entitled to their support but because we're completely with them on issues of entrepreneurship and values of families, low taxes, support for businesses," Robertson said.

Warren Kinsella, a long-time Liberal strategist who runs Ontario Premier Dalton McGuinty's war room, says while there will certainly be some tight races this election, the Ford factor won't be much of a factor after all.

"If anything, (Ford's success) probably helped the Liberals," he told CP24.com. "Now Liberals are going door-to-door and telling voters they should want someone who can represent Toronto's interests."

Besides, Kinsella said, voters might be scared off by recent polls that show Harper is within reach of a majority government.

"I've seen the data," he said. "Ignatieff's campaign has been strong, his numbers are better and there's room to grow. I don't see where Harper can grow."

Aside from that, Kinsella pointed to Toronto's local MPs as the reason why Liberals have the competitive edge.

"All Toronto ridings have pretty good constituency MPs," he said.

"That's what happens when you're in opposition – there's no largesse to focus on so the MPs focus on the riding. They have brand value plus they're good constituent MPs," Kinsella said. 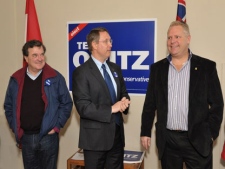