TORONTO - A labour leader is calling on Metrolinx to reject Toronto Mayor Rob Ford's proposal to extend the Sheppard subway line with the help of private funds.

Ford has proposed to Metrolinx, the regional transit authority, that a subway extension be built instead of a planned light rail line.

CUPE Ontario president Fred Hahn says taxpayers will be the ones left paying more if Ford's plan goes ahead.

And Hahn notes that in England, taxpayers were left on the hook for nearly $4 billion when the London Underground became a P3, then failed after only four years.

"Ford is setting the table for a huge transfer of public wealth into corporate coffers if his P3 proposal goes forward," Hahn said Thursday.

"When the corporations have had their fill, hard-working taxpayers are going to be the ones left with the hangover, and the tab," he said.

Metrolinx president Bruce McCuaig said Wednesday there is $8.15 billion available from the province for four light rail projects in Toronto.

Metrolinx is looking at the subway proposal and will be getting back to the city soon, McCuaig said.

But he said that any changes proposed by the city must deliver the same level of transit and stay within the budget. 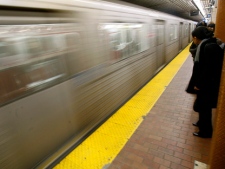