TORONTO - The Conservatives' pledge to axe Ontario's green energy plans would hobble the province at a time when economies around the world are racing to build renewable industries, a former top U.S. adviser warned Wednesday.

John Podesta, the former chief of staff for ex-president Bill Clinton, said Ontario risks losing its status as the "continental leader" in clean energy if the Tories are elected this fall.

The Opposition "has suggested abandoning the real solid track record that's already been established," he said.

"This obviously is being debated at both a political level and a public level and I think when you look at what's going on in terms of . . . creating the kind of business climate businesses want to invest in, then this is a critical moment."

Podesta, who now heads the Center for American Progress, a liberal think tank, was scheduled to discuss the global push towards green energy Wednesday night at the MaRS Discovery District in Toronto. The speech was sponsored by environmental groups, including the World Wildlife Fund and Environmental Defence.

Ontario's nascent green economy is poised to become a key issue in the Oct. 6 provincial election, with the major parties already butting heads over the future of the Green Energy Act.

The Progressive Conservatives have vowed to scrap the act, particularly its feed-in tariff program, which pays producers lucrative rates for their green energy.

They have argued the subsidies jack up electricity prices for Ontario residents and businesses, essentially stalling the province's economic growth.

"Easy for John Podesta to say . . . He hasn't has to pay (Premier) Dalton McGuinty's skyrocketing hydro bills resulting from these disastrous policies," he said in an email.

The governing Liberals have countered the Opposition's stance is scaring away investors and putting green sector jobs at risk.

Energy Minister Brad Duguid said the government's green energy initiatives have led to 13,000 new jobs across the province and drawn billions of dollars in investments.

"The only thing driving uncertainty right now is a political uncertainty brought about by (Conservative leader) Tim Hudak's reckless promise to kill our clean energy economy and take down thousands of jobs with it," he said in an email.

Podesta warned that if the province backtracks on its commitment to clean energy, it could influence other economies weighing their own plans.

"To abandon the clean energy path, I think, would send a bad signal around the world," he said.

Podesta was Clinton's chief of staff from 1998 to 2001 after years of working in the White House in a number of positions, including senior policy adviser on privacy and telecommunications security.

Podesta has also spoken out against Alberta's tar sands, challenging industry assurances that oil can be extracted from the sands in an environmentally friendly way. 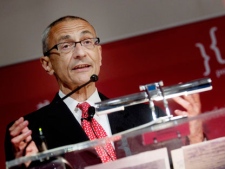 John Podesta, president of the Center for American Progress, speaks as he chairs a meeting in Oslo Thursday May 12, 2011. (AP Photo/Kyrre Lien, Scanpix Norway)