As if the high prices at the pumps weren't aggravating enough for motorists.

Drivers have found another frustration to deal with as a handful of gas stations around the Greater Toronto Area have run out of gasoline because of a fuel shortage.

Some Shell stations in Toronto and other parts of southern Ontario are sitting on empty because of a delay at Shell's refinery in Sarnia. Others are running low after the refinery was shut down for maintenance.

"We usually are able to tap into the southern Ontario supply market. When we went looking in that marketplace, there wasn't really a whole lot available, it was extremely tight," Jeff Gabert, a spokesman for Shell Canada, told CTV.

In addition to Toronto, CP24 viewers have reported shortages in Burlington and London.

(Are you aware of a gas station that has run out of fuel? Send an e-mail to CP24 at now@cp24.com with the location)

This shortage could be just the beginning.

Natural Resources Canada is warning that fuel shortages may occur more frequently in the future because the country's three main refineries are operating at 100 per cent capacity and demand is growing.

Gas price analyst and former Liberal MP Dan McTeague told CTV that gas shortages are due to a "high level of utilization and lack of investment in refineries."

However, some short-term pain at the pumps may result in a gain for motorists.

The gain will come in the form of savings, according to some analysts, who believe the prices of gas will drop by several cents once the supply is replenished.

As of Wednesday morning, drivers in Toronto are paying an average of $1.22 per litre. A year ago, motorists were paying $1.04. 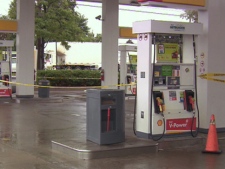