Goderich getting $5 million for tornado cleanup

The Province of Ontario will contribute $5 million to rebuilding efforts in Goderich after a Tornado tore through the town late Sunday afternoon.

In making the announcement today Premier Dalton McGuinty said the money would go towards repairing some of the damage to homes and business not covered by insurance.

It is coming out the province's Disaster Relief Fund.

"Job number one is to make sure everyone is safe and secure, restore power, clean things up and in the longer term rebuild," McGuinty told reporters gathered at a news conference.

The town of Goderich declared a state of emergency after a tornado, rated a three on the five-point Fujita tornado intensity scale, devastated the community Sunday afternoon, killing one person and injuring dozens.

Ontario Provincial Police said a 61-year-old man, identified as Norman Laberge, was killed while he was working at the town's salt mine.

Laberge was a resident of nearby Lucknow.

Officers from several communities, including Toronto, converged on Goderich on Monday to sift through the wreckage during a widespread search and rescue operation.

(Click here for a photo gallery of the destruction)

With winds of up to 300 kilometres per hour, the tornado touched down and destroyed much of Goderich's core – flipping vehicles, uprooting decades-old trees, destroying several century-old buildings and leaving a trail of debris – after a violent storm system rolled across Lake Huron shortly before 4 p.m.

"This is the worst damage I've ever seen," said Environment Canada meteorologist Randy Mawson, who has been investigating storms for 36 years.

It was the most powerful storm in Ontario in 15 years, Mawson said.

Tornado warnings are usually issued about 10 to 15 minutes in advance, he said.

Herb Marshall, the owner of the Park House Bar and Restaurant, said the scene was right out of a Hollywood blockbuster.

"(The storm) came up the hill off the lake ... and just took everything with it," Marshall said. "I believe I saw a garbage bin up in the air going by."

Amateur video showed the devastation in the town's square, where vehicles were tossed like toy cars, roofs of buildings were ripped off and debris rained down.

"We saw tables and chairs outside of the cafe flying and then saw an SUV roll like a tumbleweed right in front," said16-year-old Cassandra Phillips-Grande, who was in a coffee shop in the town square when the storm hit.

Everyone in the coffee shop moved to the back of the building to get away from the windows.

"About two seconds later we heard this really big crash and the roof collapsed in the spot where we had all been," Phillips-Grande said. "When we went outside we saw that some apartments had collapsed right in front of the cafe."

After the twister passed, people rushed outside to survey the damage, assist the injured and clear debris that blocked roads.

"We cleared out the streets ourselves, we just walked out there to get chainsaws and started clearing it," said Sean Carver, who watched the storm from his patio. "The town actually comes together and everybody starts helping everybody. There's kids walking down the street with hack saws, teenagers just helping anybody that needs help."

Natural gas service has been turned off as a precaution, leaving 3,300 customers without service.

In the aftermath, police described the scene as "catastrophic damage."

For safety reasons, police have sealed off Goderich's downtown core and are barring people from entering the area.

Goderich residents who are in need of assistance, shelter or food are asked to attend the Knights of Columbus Centre on Parsons Court, where members of the Canadian Red Cross and other agencies are on hand to provide help.

Meanwhile, Environment Canada is sending a team to Goderich to survey the tornado damage and confirm its ranking on the Fujitia scale. Preliminary reports indicate the tornado was an F2 or F3.

Goderich is about 200 kilometres west of Toronto on the shores of Lake Huron. 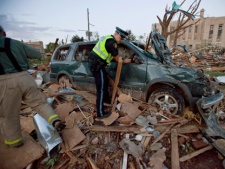