Shawn-Patrick Stensil, a nuclear analyst with Greenpeace, says fears of a nuclear meltdown in tsunami-ravaged Japan should be enough for Ontario to reconsider the safety of nuclear power.

"Fukushima is a reminder that where there is nuclear power, there is a realistic potential for a nuclear accident with enormous cost to the environment, our economy and our society," Stensil told a joint news conference at the Ontario legislature.

Doris Grinspun, executive director of the Registered Nurses' Association of Ontario, urged the governing Liberals and the Opposition for "sober second thought" on their nuclear energy plans.

"Nuclear power is an unforgiving technology," Grinspun said. "Japan reminds us that all nuclear reactors are vulnerable to the potentially deathly combination of human error, design failure and natural disaster."

But the Ontario government shows no signs of slowing down its plans to build two new units at Darlington nuclear station.

And the Progressive Conservatives say that, if elected, they would go ahead with plans to expand nuclear energy.

Progressive Conservative MP Jim Wilson, who served as energy minister about a decade ago, says there may be additional costs as the province looks to improve safety following the disaster in Japan.

But nuclear energy would still be more affordable than the alternatives, he said.

"We think it's safe, it's reliable, it's dependable, it's emission free," Wilson told reporters Wednesday morning.

"Our system is a safe system. It has provided over 50 per cent of our electricity for the past 30 years, and we have some 70 years of nuclear leadership and expertise in Canada."

Several countries around the world including China, Germany and Switzerland, have decided to postpone their nuclear energy plans in response to the Japanese crisis.

Public hearings about the Darlington project are slated to begin Monday.

Meanwhile, a water leak at a nuclear power plant east of Toronto drew attention Wednesday in light of the debate surrounding nuclear energy.

But officials say the demineralized water that leaked from the Pickering plant Monday night does not pose any significant threats to public health.

During a speech to earlier in the day to the Toronto Board of Trade, Denise Carpenter, CEO of the Canadian Nuclear Association, defended nuclear energy and said decision makers should not be motivated by fear.

Carpenter said the plant in Fukushima did not suffer damage from the earthquake, which measured nine on the Richter scale, but from the subsequent tsunami.

"A 40-year-old reactor complex, that was designed to withstand a 7.8 or 7.9 earthquake, actually withstood a much larger quake without significant damage," Carpenter said.

The nuclear plants currently in use in Canada are "among the most robust designs in the world," she added, and have been built to withstand earthquakes, although they are located in areas where major quakes are uncommon.

Despite the recent tragedy, it is unlikely Japan will ditch nuclear energy and return to burning coal when residents resume their working lives, Carpenter said.

"No more than after 9-11, North Americans decided to stop working in tall office buildings, or to stop travelling by air," Carpenter said.

She added that the disaster in Japan will be examined for safety lessons that can be applied in Ontario. 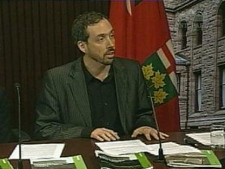