WIARTON, Ont. - Two out of three of Canada's furry forecasters are calling for an early spring.

But Manitoba's lesser known woodchuck, Winnipeg Willow, is siding with Pennsylvania's Punxsutawney Phil, who is calling for six more weeks of winter.

Folklore has it that if a groundhog sees his shadow on Groundhog Day he'll flee to his burrow, heralding six more weeks of winter, and if he doesn't, it means spring's around the corner.

Willow was so startled at all the attention, she tucked her face into her handler's jacket, and failed as a result of not looking to see her shadow.

The forecasts come in the middle of an unusually mild winter that has taken even seasoned meteorologists by surprise.

Environment Canada warned this fall to expect colder-than-normal temperatures in the north and west.

But the past few months have brought balmy weather peppered with a few cold snaps in most of the country.

Last year, several of the groundhogs -- including Willie -- predicted an early spring while a raging snowstorm battered Ontario.

About 150 people cheered Sam's forecast on an overcast day at Shubenacadie Wildlife Park shortly after dawn.

"I don't think we are going to have balmy spring weather tomorrow, but there is a light at the end of the tunnel," said Susan Penney, a station co-ordinator at the park, about 60 kilometres north of Halifax.

In Wiarton, a crowd in the hundreds, some dressed as groundhogs, waited as Mayor John Close listened to Willie's prediction.

Close's announcement of "hello summer, it's an early spring," drew wild cheers after Willie failed to see his shadow.

The group has come out for the event for 10 years, and dressing up is part of the tradition, Allison said, clutching a stuffed toy groundhog.

"I'm very happy -- I don't think I want any more of this," Allison said, though she admitted the weather "could be worse."

Mac McKenzie, who started the Wiarton Willie tradition more than half a century ago, said the festival has helped put the southwestern Ontario community on the map.

"When we first had it, we had only 12 people, that's all there was," McKenzie said.

In the United States, Pennsylvania's Punxsutawney Phil emerged from his lair to "see" his shadow on Thursday, predicting six more weeks of winter.

The groundhog made his "prediction" to loud boos on Gobbler's Knob, a tiny hill in the town for which he's named about 100 kilometres northeast of Pittsburgh.

Temperatures were near freezing when he emerged at dawn, which is unseasonably warm for the area.

While Canada's groundhogs may say the end of winter is just around the corner, meteorologists agree the country's furry forecasters are predicting the end of something that hasn't even begun.

Unseasonably warm temperatures from coast to coast have made winter a non-event for most Canadians, weather experts say, adding the unusual conditions have stymied their prognostications for months.

"The one thing uniting all Canadians right now is the question of 'where's winter?' We're almost sending a search party looking for it," said Environment Canada senior climatologist David Phillips.

"Even in the Arctic we're seeing examples of a winter that has not behaved normally the way it should be."

Phillips said temperatures in Ontario have been consistently 3.5 degrees above normal for this time of year, while balmy breezes and recent rainfalls have washed away all traces of the season's sparse snowfalls.

It's been even warmer on the Prairies, with temperatures averaging 5.5 to seven degrees warmer than usual, he added.

Meteorologists say typical signs of winter have been wiped out by an "arctic oscillation," a phenomenon that's seen the constantly moving jet stream remain relatively stationary and keep winter conditions at bay.

"The general idea here is that the jet stream is pushing a bit farther north this year," said Chris Scott, a meteorologist with the Weather Network. "It's allowing more warm air to come across much of the country. It's also keeping that cold air well to the north."

Scott said the oscillation has been enough to counter the effect of La Nina, a cooling of ocean waters off the coast of South America, that usually sends colder air towards Canada.

It was the presence of La Nina that prompted forecasters to warn of a particularly harsh winter in parts of the country. Environment Canada said the west coast was in for particularly icy conditions, while the Weather Network's projections included warnings of major storms in western Canada and a roller-coaster of fluctuating temperatures nationwide.

Scott believes the abnormal conditions are likely to last into February, but suggests the unpredictable season may still have surprises in store.

"Here where winter is born, where we built a reputation on winter, it is premature to expect that winter will go away and spring is on the way in spite of what the groundhogs say. 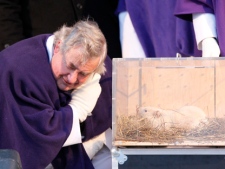 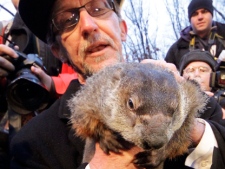