OTTAWA, Ont. - Prime Minister Stephen Harper has applauded the outcome of the G20 summit but says more needs to be done to ensure the world economy stays sound.

Harper says agreements reached at the G20 summit are "important downpayments" on a framework for "strong, sustainable and balanced growth."

But he says: "The G20 still has a lot to do to fully entrench recovery."

Harper made the statement Sunday night at the conclusion of the G20 summit in Toronto.

Leaders at the G20 summit backed a Canadian-led plan to cut deficits and stabilize the world economy.

The final communique commits advanced economies to cutting their deficits in half by 2013, and putting debt loads on a stable or downward path by 2016. 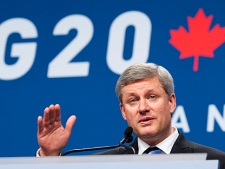