OTTAWA - The Harper government is making no apologies for spending millions on things like glow sticks, snacks, bug spray and sun screen during the G8 and G20 summits last June.

Government House leader John Baird said Friday the government is very proud of what it accomplished at the back-to-back summits in Hunstville, Ont., and Toronto.

He insisted the majority of the estimated $1.2-billion tab went to protect world leaders and secure the two summit sites. Given the violence that marred the Toronto G20 summit in particular, Baird said it was money well spent.

"Canada did host the world. We are proud of the summit that produced significant results for both the economy and for those living in the Third World," Baird told the House of Commons.

"We are also very proud that the security worked so well, given the huge destruction that we saw by riotous protesters."

About $200-million worth of eye-popping expenses, racked up primarily by the RCMP and the Public Works Department, were disclosed by the government late Thursday in response to a query by a Liberal MP.

Opposition parties demanded that the government come clean on the details of the remaining $1 billion in summit costs.

Deputy Liberal leader Ralph Goodale scoffed at the government's justification for the summit expenditures disclosed so far. He said many were "astronomical" and unrelated to securing the sites or protecting world leaders.

Moreover, many of the contracts were given without competitive bidding, he said.

"The expenditures that have been reported are grossly extravagant and, in some cases, ridiculous, dealing with bug spray and sun screen and glow sticks and that sort of ... trivia."

Goodale agreed the government must be responsible for security at such events but he added: "This government has just blown the bank with foolish extravagance and blamed it on their international obligations."

The documents revealed that taxpayers shelled out more than $10 million for hotel accommodation and more than $5 million in vehicle rentals for the RCMP, $4.4 million for the notorious security fence and $439,000 on portable toilets.

The Auditor General is already examining security expenditures for the summits but Goodale said her mandate should be expanded to cover all costs. If that proves impossible, he said parliamentary committees may have to pursue the details and, eventually, a public inquiry may be necessary to get to the bottom of all the expenses.

New Democrats, meanwhile, said RCMP sources have told them that the Mounties have been ordered to absorb about $100 million in summit costs. As a result, the force has had to cut the number of new recruits being trained.

"The government should ask Canadians what they want their hard-earned money spent on: Glow sticks and sunscreen or more cops on our streets," said NDP MP Jean Crowder.

However, an RCMP spokesperson said the training division was not required to absorb summit costs, which were paid for by the federal government.

While policing costs are part of the RCMP's mandate, Baird said the government provided "significant" supplemental resources to cover the one-time summit costs.

As for the bug jackets, snacks and sun screen, he said some 20,000 police officers were deployed to secure the summits and the government had an obligation to ensure they were properly fed, clothed and protected from the elements.

Baird could not explain why $14,000 worth of glow sticks, purchased by Public Works, were necessary for summit security. 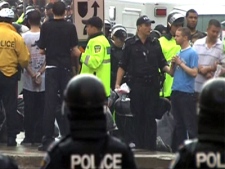