Harper stands to collect pension of more than $100,000 per year 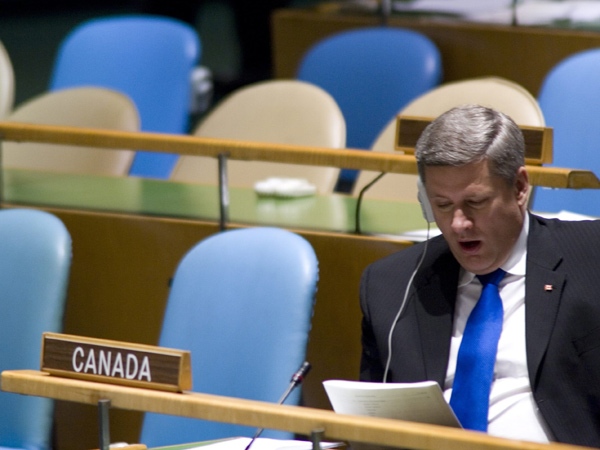 OTTAWA - Almost all the remaining MPs from the old Reform Party -- including Stephen Harper -- stand to collect over $100,000 a year in pension benefits once they retire.

Eleven of the original group of 52 Reformers, who captured public attention with their stand against "gold-plated" pensions for members of Parliament, are still sitting in the House of Commons.

And they may find their old pension promises coming back to haunt them as the Harper government turns its attention to eliminating the federal deficit.

Back in 1993 when Reformers first arrived on Parliament Hill, the party made its name by advocating cuts to MP pensions as a way of leading by example and facing down the deficit.

Now though, almost all of the original group of Reformers who said they would turn down the generous benefits package have quietly opted back in, according to tracking by the Canadian Taxpayers Federation. (Preston Manning and Werner Schmidt were the key exceptions.)

Of the remaining 11 former Reformers in the Commons, 10 of them would receive well over $100,000 a year in benefits if they were to retire by the end of the year, numbers crunched by the lobby group suggest.

While MPs' individual pension benefit details are not published, the formula used to calculate them is, explained Derek Fildebrandt, the federation's national research director.

Prime Minister Harper, who was first elected in 1993 but then took a break from Ottawa before being elected again in a by-election in 2002, would receive about $150,244, according to the group's calculations.

In a 1995 speech, he called the pension package a "monstrosity" that was "obscene."

"My wife and I just purchased our first home and we are planning for our future, but I could not go home and look my wife or my constituents in the eye if I opted into a plan like the one offered in Bill C-85. Instead, I will put my own money into an RRSP," he told the Commons.

Saskatchewan MP Garry Breitkreuz, who stands to collect $118,668 annually, was adamant 15 years ago that reining in MP compensation was the key to economic recovery.

"Let me propose this," he told the Commons in May 1995. "Let us remove this Cadillac pension plan. Let us reduce the salary of MPs until they solve our debt and deficit problem, until they begin to reduce taxes, until the jobs come back into the country."

Keith Martin, who now sits as a Liberal but started out as a Reform member, said MPs' pension compensation should mirror the private sector.

A decade and a half later, MPs' compensation packages are coming under scrutiny again, as the Conservatives prepare a budget in which they've promised to show how they will eradicate the deficit.

Public service unions fear a government raid on their pension packages may be in the works in the name of spending reductions, especially since sympathy in the private sector for public servants is not visible.

Animosity between the public and private sector has heightened as the recession weakened many corporate pensions, while highlighting the generosity of government benefits.

The unions have mounted a "hands off my pension" campaign and are nervous as federal ministers talk louder about the need to cut costs. Last week, Treasury Board President Stockwell Day met with union leaders in an attempt to cool things down but then told the media that everyone will have to make sacrifices to reduce the deficit.

"Our members are very concerned and are preparing for that threat, that our pension plan may be targeted," Gary Corbett, president of the Professional Institute of the Public Service of Canada said in a recent interview.

At the same time, both the Canadian Federation of Independent Business and the C.D. Howe Institute, a Toronto-based think-tank, have argued that public service pensions are too rich.

The taxpayers federation agrees. But before the federal Conservatives even consider cutting into public service pensions, the lobby group contends they should live up to the vow to cut their own pensions that gave their predecessors traction in Ottawa 15 years ago.

"We're hopeful that they (the Tories) will look at serious reforms to government pension plans, and will also tackle their own packages," said Fildebrandt. "They'll have the moral authority to do it if they do it themselves."

Indeed, the public service unions are taking some comfort in the fact that the Conservatives would find it very difficult to weaken government workers' benefits without touching their own.

"It would be very difficult for them not to be touched," Corbett said.