HIV killer says not wearing condoms could be OK

HAMILTON, Ont. - A man believed to be the first in Canada convicted of murder through HIV transmission told a court Thursday that if he is ever released from prison he will always disclose his status to sexual partners, but won't necessarily use a condom if the woman is a "risk taker."

Aziga's convictions are related to 11 women with whom he had unprotected sex without telling them he had HIV. Seven of the women became infected, with two dying of AIDS-related cancers.

The Crown is seeking to have Aziga designated a dangerous offender, which would see him jailed indefinitely.

In his second day on the stand at the hearing, Aziga said Thursday that should he be released from prison his first priority in sexual encounters will be to disclose his HIV status.

After that, "if the woman is a risk taker," then he would know he could take the risk of unprotected sex, "knowing very well I told her I am HIV positive," Aziga said.

However, Aziga also said he would want to wear a condom for his own good, because now that he is on medication his viral load is almost zero, and he wouldn't want to risk re-infection.

Aziga came to Canada in 1984, settling at first in Ottawa, then moving to Guelph, Ont., before ending up in Hamilton. He told court Thursday that he believes he was infected with HIV after a 1985 incident involving a cat.

Aziga required surgery after a cat bit him while he was working at a veterinary clinic in Ottawa, he said.

"One of those moody cats in the Siamese family, very violent," he said. "Within 20 minutes this arm was paralyzed. Within one hour the whole side was immobile."

He went to the hospital and surgery was performed, using what Aziga now believes were unsterilized surgical implements. The tray of instruments wasn't "crispy clean," he said, suggesting he may have contracted HIV that way from another hospital patient. He did not receive a blood transfusion. Under questioning on the stand he didn't appear to consider sex the likely transmission source.

Aziga was diagnosed HIV positive in 1996 after he started getting chronic lung infections, but he did not start taking medication until 2005, court heard. He was arrested in 2003 and has been in custody ever since.

When he first took the stand Wednesday, Aziga read a statement in which he said he regrets and apologizes for not disclosing his HIV status.

Under the Criminal Code, a person convicted of a "serious personal injury offence," and found at a sentencing hearing to pose an ongoing risk, can be imprisoned for an indeterminate period.

A dangerous offender can first apply for parole after seven years. After that, the person can apply again every two years. If the parole board never determines the offender is fit for release, he will stay in prison for the rest of his life.

Aziga is set to continue testifying Friday and is expected to be cross-examined by Crown attorney Karen Shea. 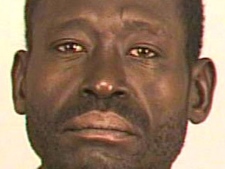 Johnson Aziga is shown in this undated handout photo.