TORONTO - Would you like a side order of substitute spouse with your meal?

If you're a male restaurant patron being served by a female, there's a good chance you do, according to the new film "Dish -- Women, Waitressing & the Art of Service," which is screening at the Hot Docs festival.

Filmmaker Maya Gallus took cameras to restaurants around the world to document the role of the female server in popular culture, and says she found a great gender divide when it comes to diners' expectations.

"What I discovered is that female customers really want to be served, they're picky and fussy," Gallus said in an interview.

"And male customers don't really care about the level of service as long as the waitress is good-looking -- and male customers really project a lot of expectations onto a female server in terms of substitute wife, substitute girlfriend, fantasy, desire."

The Toronto-based director has a history of exploring gender issues, with films including "Erotica: A Journey Into Female Sexuality," "Punch Like A Girl" and 2007's "Girl Inside," which won her a Gemini Award for best direction of a documentary.

Her interest in documenting food service from a female perspective, she said, stems from her own experience in the service industry. "My first job was as a waitress and I waitressed for many years.

"It is a rite of passage for many women, it's a job that often is passed down from mother to daughter, and I was interested in the expectations that customers bring to the relationship between customer and server, and particularly to a female server."

Gallus also wanted to investigate the stigma attached to the role of waitress.

"I think that there is this sort of iconic image of the waitress as, you know, the sexy server," she said. "But it's also considered a pejorative image: waitressing is a bottom-feeder job, it's low-level, it doesn't pay well."

Gallus spent between two and three years making the doc, following individual servers during their shift like a fly on the wall, from the kitchen to the front of the house.

The film's first stop is Toronto, where we see the waitresses in their iconic settings: truck stops and diners.

Cameras then move through sexy restos in Montreal, the world of haute cuisine in Paris and finally Tokyo cafes where waitresses wear maid costumes and act as servants.

"One shouldn't forget that we play a role, that we become a character," says one waitress in the doc.

"It's a big game," offers another as she decribes "tricks" she uses to net big tips, like touching diners' shoulders or giving them a kiss on the cheek when they leave.

Gallus said while there are many universal aspects to the job, there are also some regional differences.

"In North America, the service industry is a female-dominated profession but it really is at the low end in terms of truck stops, diners and cafes and bars.

"Once the level of service increases to the level of high-end and haute cuisine such as in Paris, then it becomes a male-dominated profession, it's salaried, it's respected, it's a vocation, really." 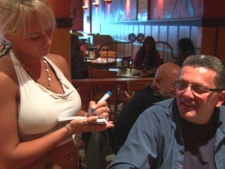 Waitress Krystele takes an order at Housters in Montreal in a scene from "Dish: Women, Waitressing & the Art of Service," which is at the Hot Docs festival. THE CANADIAN PRESS/HO