ST. JOHN'S, N.L. - Hurricane Igor ripped across eastern Newfoundland on Tuesday with a savagery that forced flooded, wind-battered towns to declare states of emergency, isolating some communities as rivers overflowed and roads washed away.

Police were investigating reports that an 80-year-old man was swept out to sea when the road beneath him collapsed in the Random Island area, about 100 kilometres northwest of St. John's.

The RCMP said only local residents were able to search the area because of impassable roads. Officers and the coast guard weren't able to access the island because air and sea travel were also impossible due to the fierce storm.

"It appears we have a very serious situation on our hands," Premier Danny Williams said.

Williams said he was monitoring the storm's damage closely and would visit some of the affected communities Wednesday.

At least 30 communities, including Clarenville and Marystown, declared states of emergency because of localized flooding.

"We've never seen such a violent storm before," said Marystown Mayor Sam Synard from his office, where he monitored the storm's impact.

He said more than 200 millimetres of rain was dumped in 20 hours, "and very few, if any communities in the country, could deal with that amount of rainfall."

"We've lost sections of our main roads, completely washed out to sea."

Keith Rodway, a member of Clarenville town council, said parts of his town had to be evacuated.

"We've pretty much shut down the entire town," Rodway said. "We've moved at least 50 families away from an area below a dam that's a reservoir for our fish plant."

Rodway said other families in the town of about 5,300 were taken to a couple of schools for fear they'd be isolated by road washouts.

The storm knocked down trees and hurled everything from picnic tables and oil barrels to small fishing sheds around the small community of South East Bight, just across the Burin Peninsula.

Darryl Ward said he walked through the community shortly after rains and winds picked up, seeing at least one boat tossed on shore and large trees down on homes.

"There's water everywhere," he said from his home. "(It's) flooding roads, taking gravel off roads and gouging it out -- any badness it can do."

RCMP said roads throughout the Burin Peninsula were washed out or submerged and the Rattling Brook Bridge on Route 210 was damaged, cutting off the only link to the Trans-Canada Highway.

"We can't get to the bridge. We're hearing it has certainly deteriorated enough that it's impassable," Sgt. Wayne Edgecombe said.

"Whether it's collapsed or it's impassable, it doesn't really make any difference -- we can't get across it."

About 20,000 people live on the Burin Peninsula.

Officials at the Canadian Hurricane Centre downgraded Igor to a post-tropical storm by Thursday afternoon, but it was still packing hurricane-force winds in excess of 150 km/h.

The centre said that as of 5:30 p.m. local time, 238 millimetres of rain fell in St. Lawrence and a peak wind gust of 163 km/h was recorded at Sagona Island on the province's south coast.

"I've never seen anything with this duration and ferocity and certainly as much rain," said Dennis Shea, manager of the province's Fire and Emergency Service office.

The Trans-Canada Highway through Terra Nova National Park was closed. Schools were shut down and flights at the St. John's International Airport were delayed or cancelled.

The Royal Newfoundland Constabulary urged people to stay off the roads of St. John's because of downed power lines and flying debris such as branches.

-- By John Lewandowski and Alison Auld in Halifax 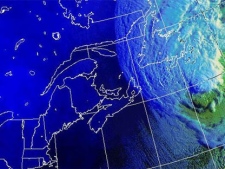