TORONTO -  Soaring electricity bills, a ban on Toronto public transit strikes, a spring budget and the countdown to a fall election campaign will be top of mind for Ontario politicians as they head back to work Tuesday.

The spring legislative session promises to be a rocky one as opposition parties sharpen their attacks on the governing Liberals, hoping to chip away at Premier Dalton McGuinty's chances of winning a third term in the Oct. 6 election.

Conservatives of all stripes have been watching Mayor Rob Ford closely, hoping his win over former Liberal cabinet minister George Smitherman will open the door in Toronto ridings that are crucial for a majority government.

When "respect for families" started creeping into Hudak's pre-election rhetoric, even he couldn't deny that the Ford juggernaut had something to do with it.

"I think Rob was hearing the same thing that I and my team are hearing across the province. People are tired of a government that is taking them for granted, that has increased taxes and has reduced the quality of services."

So far, Hudak has doggedly stuck to that script and refused to go into specifics about how he would tackle hot-button issues like rising hydro bills or the harmonized sales tax.

"There's a number of options we're looking at."

Hydro rates will jump 46 per cent over five years as the province modernizes its electricity system, with more that half of that to pay for green energy projects the Liberals have touted as key to growing the economy.

The Liberals introduced a 10 per cent rebate on electricity bills in January, but that has done little to dampen the furor over rising costs that has Niagara Falls backbencher Kim Craitor breaking ranks to declare opposition to having the HST on hydro bills.

Cracks in party unity are also starting to show among the Tories, who are facing an internal squabble between longtime Tory Norm Sterling and his libertarian colleague Randy Hillier.

Sterling, a former cabinet minister, has accused Hillier repeatedly of helping his friend Jack MacLaren usurp him in the Ottawa-area riding Sterling has held for 33 years.

MacLaren is a former president of the Ontario Landowners Association, a property-rights group dominated by rural activists that Hillier helped create.

The rift widened when Hillier's friend, Tory MP Scott Reid, wrote a letter to a Toronto newspaper in December accusing Sterling of neglecting his constituents in Carleton-Mississippi Mills.

Such internal strife could provide an easy target for the Liberals, but McGuinty has vowed to stay away from pre-election mudslinging in the legislature.

"I try to bring a mindset that's in keeping with what moves, inspires, concerns families," he said last week.

The Liberals have a few items on their to-do list, including legislation to ban strikes for the Toronto Transit Commission and a budget that could be tabled within a few weeks.

Labour Minister Charles Sousa won't say when the TTC bill will be introduced, but the pressure's on to pass it before the first contract for TTC workers expires March 31.

Although recent polls have suggested that the Tories and Liberals are in a statistical dead heat, the spring budget "should turn things around," said Henry Jacek, a politics professor at Hamilton's McMaster University.

"That's going to be the election budget for the government, and of course for the opposition, they'll have to rip that budget apart," he said.

"I think the session really is going to focus around the budget."

Jacek said he doesn't expect the Liberals will use the budget to make significant cuts that would stave off a Tory attack. But the government may announce more mergers in its plan to cut 13 of the 259 government agencies to show that it's serious about saving money.

"There will be something like that, but I don't see anything drastic," he said.

The government will likely lay out a new four-year plan that could include a few new programs, Jacek said. That will allow the Liberals to paint Hudak as the "man with no plan" if he continues to hold off on his election platform until late summer.

"One of the dangers here is that we do know that in an election year, as time goes along, a lot of people make up their minds earlier than the campaign," he said.

The Liberals would be wise not to ignore the New Democrats either, Jacek added.

"If the Liberals concentrate too much on Tim Hudak, they do run the risk that on the left side of the spectrum, that the NDP will come in and snatch a bunch of their ridings," he said.

NDP Leader Andrea Horwath said she'll use the spring session to talk about jobs, eroding health care services and how voters are struggling to pay the bills.

She also wants to put forward a platform "sooner rather than later" -- probably late spring or early summer.

But those plans could change if there's a federal election, or if the Liberals pull the plug on the legislative session -- which is supposed to end June 2 -- sooner than expected. 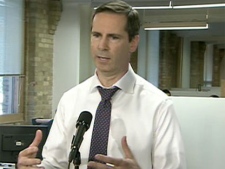