OTTAWA - A new poll suggests the high-flying NDP have not only soared past the Liberals but have also closed in on the Conservatives, with just five percentage points separating Jack Layton from first place in public opinion.

The Canadian Press Harris-Decima survey puts the Conservatives at 35 per cent support nationally, with the NDP at 30 per cent and the Liberals at 22 per cent.

Those once-inconceivable poll numbers have placed a party that is a perennial also-ran under new scrutiny.

The Liberals assailed the New Democrats on Thursday as peddlers of fiscal fantasies. And the Tories attacked them as old-style socialists who will play havoc with the Canadian economy, reversing the decades-long trend toward free-trade agreements and open borders.

Layton also faced an unusually heavy grilling from reporters who asked about the credibility of his policies and candidates.

If the poll numbers hold over the final four days of the campaign they could translate into more than 100 seats for the NDP, said Allan Gregg, chairman of Harris-Decima.

He warned, however, that it's impossible to make seat projections given all the potential factors -- voter turnout, last-minute doubts about Layton, and NDP momentum -- that could swing the results one way or the other.

"This is unprecedented. In all the years I've been following federal elections, and I think this is my 11th, I have never seen anything like this," Gregg said.

"First, I've never seen a third party surge in the polls. And I've also never seen a party surge this much. Jack Layton and the New Democrats have doubled their popular vote since this election started ... and it's not over yet."

With their newfound prominence, the NDP has been getting hammered for running what appears to be ghost candidates in ridings that were once longshots.

It was revealed that one Quebec candidate has not only been vacationing in Las Vegas -- she also apparently struggles to communicate in French, despite the fact that she's running to represent an almost exclusively francophone riding.

Layton tried to explain it away Thursday by saying "people were doing their best," and that they had family plans that couldn't be changed. But when the questions kept coming, his usual cheerful demeanour cracked.

"So that you can ask your questions, I'll let you interrupt me as often as you want, but I'll try to answer as best as I can. Can I finish a sentence?" he lamented at one point.

The exchange came as poll results indicated the New Democrats had doubled their support since the campaign began late last month, thanks mainly to huge gains among Quebecers and women voters.

The Canadian Press Harris-Decima poll had the NDP with a 20-point lead in Quebec over the Bloc Quebecois -- 42 per cent to 22 per cent -- and leading the Conservatives by one point among female respondents.

It also suggested significant gains in B.C., where the NDP was two percentage points behind the Tories and 21 points ahead of the Liberals.

The key battleground of Ontario remained a rare bright spot for the Liberals. Michael Ignatieff's party led there, supported by 34 per cent of respondents compared with 33 per cent for the Tories and 25 for the NDP.

The telephone poll of 1,011 respondents was conducted April 20-27. The national figures are considered accurate to within 3.1 percentage points, 19 times out of 20. The regional breakdowns have a smaller sample size and larger margin of error.

The prospect of an NDP-led government had Prime Minister Stephen Harper warning of economic doom. The party's Canada Pension Plan and Employment Insurance promises would result in higher premiums, he claimed.

And while Canada is working to close several free-trade deals, including with the European Union, and more open trade with the U.S., Harper predicted an NDP government would halt that momentum in its tracks.

"The NDP approach to issues like trade has not changed since the Cold War," Harper said. "It's an ideological throwback -- bad for the economy, bad for Canada."

He also claimed the party's cap-and-trade climate policy would result in a 10 cent-a-litre gas hike.

Layton dismissed the warning about higher gas prices. He suggested any impact from a cap-and-trade program could be offset by other moves, such as cracking down on collusion in the gas industry. And if that doesn't work, he added, "we're clearly going to have to look at further measures."

Gregg predicted that it would be difficult for opponents to scare voters away from Layton. He said the NDP benefits from its relatively mainstream platform, along with the personal popularity of its leader.

"They're no longer the party that is going to tie the rich to the railroad tracks or to nationalize the banks. And Jack Layton had the advantage, first and foremost, of not being the other guys -- but also coming into this election as far and away the best liked at a personal level of any of them.".

There are potential risks for Layton. One is NDP supporters not showing up to vote, Gregg said.

The other is the prospect that some voters might, at the last minute, recoil at the mental image of "Prime Minister" Jack Layton. If that starts looking like a possibility, Gregg said, the support levels could drop over the campaign's final weekend. 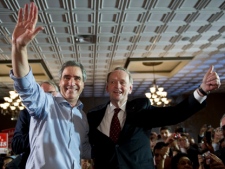