A Justin Bieber fan says she was "freaking out" when she spotted the teen idol shopping for Boxing Day bargains at a mall in Kitchener, Ont.

Bieber was among those checking out the stores at the Fairview Park Mall on Sunday.

It didn't take long for groups of adoring girls to spot the singing sensation, who hails from nearby Stratford.

Chante Gratton, 14, says she was in the same line as Bieber at one store where she was buying some clothes.

"I was shaking with excitement, I was so happy," Gratton said.

"This is my first time ever seeing him in person. I'm a really big fan of his, so I really had to see what he was up to."

Gratton says a couple of her friends tried to go up to Bieber but couldn't make it through the bodyguards and other girls crowding around him.

By the time Bieber made it to a sunglasses store, the crowd was so large that Gratton says they shut the doors to the store, with mall security outside and two police officers inside with him.

An amateur video shows Bieber patiently waiting in line and smiling at one store, while a girl can be heard exclaiming "Oh my God, Oh my God." 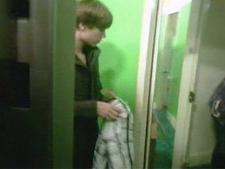 Justin Bieber appears to be shopping on his own in a mall.