TORONTO - Justin Bieber had quite an introduction to the MuchMusic Video Awards on Sunday, winning three trophies in front of a mass of screaming fans who camped out for days to see him.

Bieber won the viewer choice awards for best video and new artist as well as the prize for international video by a Canadian for his smash hit "Baby."

The 16-year-old seemed genuinely surprised as he mounted the stage.

"Coming from a small town in Canada -- repping Stratford, Ont., -- I just wanna say, this means the world to me," said a grinning Bieber, who later invited three of his close friends to join him onstage.

"It's my first award, and to have it in Canada is just amazing."

Spirited fans braved a searing day on the concrete sidewalks that encircle the Much building to land a premier spot -- this after the same fans had camped out for days to initially land wristbands for the show weeks ago.

"I want to say thank you to all my fans who got me in this position," Bieber said.

"Thank you guys so much," said lead singer Jacob Hoggard before turning his attention to shirtless "Jersey Shore" star Pauly D, who presented the award.

"I'd like to thank Pauly's left and right nipples as well."

Hard-rockers Billy Talent also took a pair of trophies, including rock video of the year, while Toronto rap star Drake and collaborator Trey Songz won two trophies for their song "Successful" (cinematography of the year and hip-hop video of the year).

"We made this happen at a very early stage in my career," a grinning Drake said as he accepted the second award, which came from a leading seven nominations.

Last year's hosts, the Jonas Brothers were also awarded with some hardware: international video of the year by a group for "Paranoid," while Ottawa rapper Belly nabbed the MuchFACT indie video of the year trophy.

Of course, each year's instalment of the MMVAs is remembered as much for the impromptu watercooler moments as the actual awards -- remember Avril Lavigne mooning the camera all those years ago?

Last year, Lady Gaga authored the show's most memorable moment when she closed a visually ambitious performance by posing with a flaming bustier -- a visual Marianas Trench singer Josh Ramsay eagerly borrowed on Sunday as the band performed atop a stage erected high above the audience's heads.

One of the evening's unexpected moments actually came in the form of a glaring error. The first time co-host Miley Cyrus threw to Drake's performance, something was lost in translation, and the 23-year-old Drake -- clad all in white -- stood confused onstage until producers mercifully cut to commercial.

He did later return to the stage to successfully perform his hit, "Over."

A source later confirmed that Drake was, in fact, the only artist on the show's lineup who didn't find time to rehearse.

Viewers who expected glam-pop "American Idol" runner-up Adam Lambert to try to top Gaga by revisiting the risque territory he navigated with his infamous American Music Awards appearance might have been disappointed.

Lambert, conservatively clad in a slate-grey suit with a leopard-print tie, sang powerfully but did nothing to court controversy this time out.

He did, however, slyly reference his also-ran "American Idol" status while collecting the trophy for fan-voted best international artist.

"I usually don't win things, I'm usually the runner-up -- so thank you, I won something," he said, smiling.

It was Katy Perry, in fact, who laid claim to two of the night's most elaborate setpieces.

First, she arrived on the red carpet in the cab of an ice cream truck, dressed in a sparkling, sky-blue dress. She promptly spilled a messy pile of the sweet stuff onto the red carpet but made it up to the fans by distributing ice cream, blowing sprinkles and tossing bananas.

Later, she navigated another candyland prop onstage, performing atop a pink cake while clad in sparkling blue short shorts and a glittering silver bustier.

Cyrus, meanwhile, performed twice -- opening the show with "Party in the U.S.A." while cavorting in leather hotpants and a matching bikini and closing the evening with a performance of "Can't Be Tamed," for which the stage was decorated with a voodoo theme

The 17-year-old also won the award for international video of the year by an artist for her "Party in the U.S.A.," marking Father's Day by thanking her dad, country singer Billy Ray Cyrus.

"First, I want to tell my dad that I love him, since I forgot to call him till really late," she said. 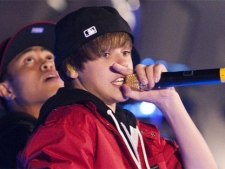 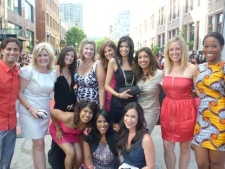 The CP24 Breaking News team walked the red carpet at the Much Music Video Awards on Sunday, June 20, 2010.