MEXICO CITY - The slayings of four youths whose bodies were cut to pieces and left in plastic bags has horrified the central Mexico city of Cuernavaca, calling up memories of a similar crime a year ago that spurred the creation of a national crime victims' movement.

Prosecutors in Morelos state said the victims, ranging in age from 14 to 21, were found Thursday in plastic bags on a Cuernavaca street along with a threatening note from a drug gang. Photos from the scene showed a handless arm lying near the handwritten note.

The youths had apparently been strangled or asphyxiated before being dismembered, according to the prosecutors' statement.

Prosecutors said the four were students at local schools, though the mother of the youngest victim, 14-year-old Brandon Contreras Gutierrez, said the boy had left home 1 1/2 weeks before "and had been hanging out with others, driving around on minibikes" in one of the city's rougher neighbourhoods.

It was not clear if he had any relationship with gang members who frequently use mini-motorcycles to distribute drugs or transport gunmen.

Morelos state Interior Secretary Oscar Hernandez Benitez said in a statement that he had ordered stepped-up patrols in the city following the killings and he called on the public "to form a united front against violence, for peace and tranquility in our state."

Local media said two high schools in the victims' neighbourhood were briefly closed and evacuated after the bodies were found. The education department did not respond to requests to confirm that.

Cuernavaca, nicknamed "The City of Eternal Spring," was once known mainly as a balmy resort area for tourists and as a weekend retreat for wealthy residents of Mexico City, just 40 miles (65 kilometres) away.

However, it has become the scene of drug cartel turf battles in recent years, and the city was shocked when the son of poet Javier Sicilia and six friends were found dead, their bodies stuffed into a car on March 28, 2011. A half dozen alleged drug gang members have been indicted in connection with those killings and are facing trial.

Sicilia went on to found a nationwide movement advocating an end to Mexico's drug violence, which saw at least 47,515 people killed between December 2006, when President Felipe Calderon launched an offensive against drug cartels, through September 2011, the latest figures made available by the government. Thousands more are thought to have disappeared.

On Friday, Sicilia said the new slayings prove that little or nothing has changed in the year since his son died and that the government continues to fail to prevent or investigate such crimes.

"Unfortunately, we are seeing the same story over and over again," said Sicilia, "These crimes in Morelos, along with the crimes throughout the nation, are proof of the government's lack of effectiveness and its distance from the people."

"The clearest proof of that is that we continue to have 98 per cent of crimes that go unpunished."

To address such concerns, Calderon unveiled the headquarters of what his government calls its "scientific police division," a wing of the federal police that will use specialized forensics and crime-scene techniques to boost investigations that in the past have been marked by clumsiness and poorly preserved evidence.

Calderon acknowledged the weaknesses of the past, saying police were "not very professional and in many cases incapable of fulfilling their primary mission of ensuring citizens' safety and, in some cases, they even allied themselves with criminals."

The new, 700-million-peso ($55 million) facility will have DNA, ballistics and fingerprint labs as well as a cyber-crime unit.

Calderon said that Mexico has made progress in detaining top drug traffickers, but that street-level violence between lower-ranking gang members hcontinues.

The burning road blockades came after an army operation in a Guadalajara suburb that the military later said resulted in the capture of the leader of the New Generation drug gang, which is believed allied with Mexico's most wanted drug lord, Joaquin "El Chapo" Guzman.

The army said its soldiers came under fire while arresting Erick Valencia Salazar, the presumed leader of New Generation, and a lieutenant whose name was not released.

Guadalajara has become a new front in the war between the country's two main drug cartels, Guzman's Sinaloa gang and the Zetas. In November the bodies of 26 young men were found stuffed in two vans and a pickup truck abandoned on an expressway in the city, an attack officials have attributed to the Zetas. 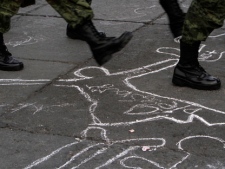 Soldiers attend a flag-lowering ceremony as they march over silhouettes, painted during a protest organized by the National Regeneration Movement, MORENA, representing people allegedly killed by military members during Mexico's drug war, at the Zocalo central square in Mexico City on Sunday, March 4, 2012. (AP Photo/Marco Ugarte)