Kobe Bryant's appearance at the Air Canada Centre Sunday afternoon was met with some resistance from protesters who oppose the basketball star's recent endorsement deal with Turkish Airlines.

Bryant was named the airline's new global brand ambassador on Dec. 14. The move was met with protests from Armenian communities around the world who called on Bryant to question Turkey's record on human rights.

According to historians, about 1.5 million Armenians died at the hands of the Turks around the time of First World War. Scholars have called the deaths the first genocide of the 20th century.

Turkey maintains that the number of deaths has been inflated and that the killings do not constitute genocide because they happened during a time of civil war and political unrest.

Canada recognized the mass killings as genocide in 2004. The U.S. has not adopted a similar resolution though the matter is being presented to Congress.

About 30 people from Toronto's Armenian community went down to the ACC carrying signs, asking Bryant to "do the right thing" and to put "morals before money."

Bryant has not officially responded to any of the criticism.

The Armenian community is particularly upset because Bryant has long been vocal about human rights issues, particularly in Darfur.

"Kobe has a proven track record of aiding various humanitarian efforts, and this is an opportunity for him to become a true "global ambassador" of truth and publicly speak out about the Armenian Genocide," said Casper Jivalagian, a member of the Armenian Youth Federation in a public statement.

Byrant was in Toronto with his team, the Los Angeles Lakers. The Lakers beat the Toronto Raptors 120-110 in the afternoon match-up. 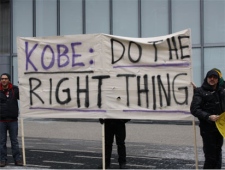 About 30 protesters from Toronto's Armenian community gathered outside the ACC on Sunday, Dec. 19, 2010 to speak out against Kobe Bryant's recent endorsement deal with Turkish Airlines.