Lady Gaga will return to this year's MuchMusic Video Awards, two years after stealing the show with a performance that ended with sparks flying from the singer's bustier.

The 25-year-old pop oddball is the first performer announced for this year's bash, which will be held in Toronto on June 19.

The timing of the MMVAs appearance will work out well for Gaga.

On May 23, she's due to release her second full-length, "Born This Way."

The title track has already hit No. 1 on the charts in Canada and the United States. 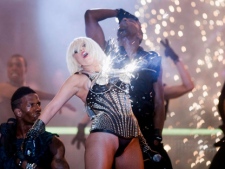