MONTREAL - The NDP says its bumper crop of youngsters is prepared to step out of the shadows and take on a more prominent role during the absence of party leader Jack Layton.

While many never bothered to campaign during the election because they never expected to win, the rookies have spent the post-election period playing catch-up -- going to door-to-door and studying local issues.

One of the party's more experienced MPs, Megan Leslie, describes the process as a "baptism by fire" -- one that has helped prepare the youngsters for the daunting task ahead.

Layton's medical leave, while he fights cancer, may pose a particular challenge for the party's nearly six-dozen rookie MPs, 18 of whom are under the age of 30.

His absence not only deprives the youngsters of a political role model but also means they may absorb some of the public scrutiny that would normally have fallen on Layton.

But Leslie, who is mentoring five of the party's new Quebec MPs, says the busy months that followed the May 2 federal election have forced the party's newcomers to learn quickly.

"I can't imagine what it's been like for them to go through this series of really intense events so quickly after they've been elected," said Leslie, who was first elected in Halifax in 2008.

"So, I know (Layton's absence) is going to be hard for a lot of them in particular because they maybe owe their involvement to Jack, or maybe some of the electorate voted for Jack and not for them?"

Even before the NDP leader's stunning announcement earlier this week, she suggested the rookies had already faced an unusually intense introduction to elected life.

First the newbies walked into the House of Commons without aides, offices or virtually any orientation and have struggled to fill a historic number of vacant political staff positions.

Now, they're dealing with the absence of their popular boss, who was replaced Thursday by interim leader Nycole Turmel.

Leslie learned about Layton's latest battle with cancer from his news conference, which she watched from her riding office with one of her apprentices: 22-year-old MP Mylene Freeman. She had invited the McGill University student to Halifax to learn the ropes of being an MP.

"Mylene and I, we kept looking at each other, 'Oh my God, what are we going to do? How are we supposed to react?' " Leslie said, recalling the moments following the announcement.

"It was really wonderful that we were there for each other as a political family, but at the same time we were all at such loose ends."

However, Leslie says Layton's health has brought the party closer together and predicts it will have a positive effect.

Leslie added that Layton's time away will also give young MPs an opportunity to step out of their popular leader's shadow.

"If what the new MPs have achieved so far is any indication of the future, we're going to be fine," she said.

Another Leslie protege is 20-year-old Charmaine Borg. One of the youngest parliamentarians in Canadian history, Borg expects to put her McGill University political science studies aside while she represents her riding near Montreal.

She says Layton's absence should not change the gameplan of younger New Democrats.

"We've always been given an opportunity to stand up and to say what we want to say, and we're certainly respected in caucus as much as any other MP," said Borg, a former co-president of the NDP club at McGill, a school that saw five of its students elected as New Democrat MPs.

"I think it's important that we take this fighter attitude that Jack Layton has definitely demonstrated in the last year and just carry that on for him in the next few months while he's away."

The Canadian Press followed Borg recently during a work day in her riding of Terrebonne-Blainville, where she appeared at ease with local officials, a powerful union boss and municipal environmental patrollers.

The bilingual Borg also attended a park inauguration in Terrebonne and cheerfully worked her way through the crowd, greeting locals with handshakes, smiles and easy-going conversation.

Still, as a native Ontarian who only campaigned in her riding for a few hours before the election, Borg admits she has much to learn about the place.

Between events she will punch co-ordinates into her car's GPS, but she blames that on her overall "horrible sense of direction" rather than her unfamiliarity with the riding.

On Leslie's advice, she is one of several rookies who have taken an unusual step: starting a door-knocking campaign after an election. Politicians tend, for obvious reasons, to do it the other way around and canvas more often before a vote.

But Borg said she's been doing door-to-door visits in the district since the election to get to know people -- and so they can get to know her.

Borg said about 100 people showed up for the opening barbecue at her riding office; she took the space over from the defeated Bloc Quebecois incumbent and had it repainted from Bloc blue to NDP orange-and-green.

Borg admits she was surprised by the NDP's breakthrough in Quebec and by her own victory. After all, those events occurred in the first election where she was actually eligible to vote.

"I'm not going to lie, (it) was my thinking. . . that I would have to wait 10 years before people could take me seriously," said Borg, who spent most of the campaign volunteering in Montreal on NDP deputy leader Thomas Mulcair's team.

"(But) you don't have to be 30 years old anymore to be considered a respectable person with legitimate opinions and intelligent."

She said she shook a little bit during her first statements in the House of Commons, but she chalked it up to passion more than nerves. Overall, Borg was happy with her early performance, which she watched on video later.

"I think I showed them that I'm not just a 20-year-old blond girl," Borg said.

But that doesn't mean life in Ottawa hasn't had its bumps, especially for an MP who's barely out of her teens.

Borg recalled how she was approached by a Conservative MP -- whom she declined to name -- on the day of the House Speaker elections.

She said she just stood there for an uncomfortable moment, not sure whether to take the envelope.

"Then finally he's like, 'Oh, are you a messenger?' and I was like, 'No,' " before veteran New Democrat Linda Duncan stepped in and told him that Borg was an MP, not a page.

"He was really awkward and kind of stepped back slowly (saying), 'I'm so sorry.' That to me was just a kind of classic, 'OK, you're not used to young people here, are you?' " 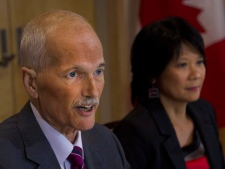