In a poignant letter written on his death bed, the NDP leader tried to assure Canadians that his party is more than a one-man show, that it will survive, even thrive, in his absence.

But even Layton's characteristic optimism couldn't mask the magnitude of the challenge now facing New Democrats.

Gone is the popular leader on whom New Democrats had pinned their hopes of finally vaulting into government in the next election.

Gone is the glue that has held disparate elements of the largely rookie NDP caucus together.

Gone is the federal leader with whom Canadians consistently told pollsters they'd most like to have a beer.

What remains is a staggered party facing formidable challenges and an enduring mystery about what actually caused Layton's death beyond the "new cancer" he referred to last month. Those questions were diverted to his grieving family.

Within moments of the Layton family issuing a statement early Monday announcing his death, the twitterverse was swamped with an outpouring of grief. Within a couple of hours, Canadians began leaving flowers and notes outside Layton's Toronto home and at the Centennial Flame on Parliament Hill, where the flag on the Peace Tower was lowered to half mast.

"R.I.P. Jack. You were our HOPE," said one message attached to a bouquet of red roses.

Condolences poured in from political friends and enemies alike.

Prime Minister Stephen Harper said Layton will be remembered "for the force of his personality and his dedication to public life."

"We have lost an engaging personality and a man of strong principle."

Harper, a piano player, recounted how he and Layton, a guitarist, had talked about playing together one day but never found the time.

"I will always regret the jam session that never was. That is a reminder that we must always make time for friends, family and loved ones, while we still can."

Liberal Leader Bob Rae said Layton, both in his work as a Toronto city councillor and a federal MP, "leaves a powerful legacy of a commitment to social justice." A one-time New Democrat and premier of Ontario before joining the Liberals, Rae said he and Layton always remained friends despite their political differences.

"Sometimes the world has a way of breaking your heart. I think a lot of us feel that way today," Rae said.

NDP officials could not bear to contemplate Monday how they'll fill the void left by Layton's death at just 61 years of age.

Party president Brian Topp, a close friend and longtime senior adviser to Layton, said the NDP federal council will take time to grieve before meeting to discuss the process of choosing a successor.

"I don't expect we will get to that for an appropriate period of time, certainly not until next week," he said.

But Layton himself had no such qualms about confronting the cruel realities facing his party, which rebranded itself as "Jack Layton's NDP" for last spring's election.

Ever practical, he penned a letter to Canadians on Saturday -- just over a day before his death -- in which he took pains to assure voters that the NDP's electoral success in May was not a flash in the pan.

He urged his party to waste no time choosing a successor, recommending that a leadership vote be held "as early as possible in the new year ... so that our new leader has ample time to reconsolidate our team, renew our party and our program, and move forward towards the next election."

Layton tacitly acknowledged that his death will cause an upheaval in the federal political sphere, potentially stalling the NDP's recent momentum and giving new life to the moribund Liberals, who were reduced to a third-party rump on May 2.

Addressing his NDP colleagues, he wrote: "There will be those who will try to persuade you to give up our cause. But that cause is much bigger than any one leader.

"Answer them by recommitting with energy and determination to our work. ... Let's continue to move forward. Let's demonstrate in everything we do in the four years before us that we are ready to serve our beloved Canada as its next government."

Addressing Canadians, Layton emphasized the NDP team, predicting his 102 MPs will prove themselves to be a "compelling new alternative" to the ruling Conservatives and urging voters to "give them a careful hearing."

He had some words specifically for Quebecers, who triggered the so-called orange wave that swept across the country in May. Enchanted by "le bon Jack," Quebecers handed the party 59 of the province's 75 seats even though many New Democrat candidates were complete unknowns, some of whom could not speak French and had never visited the ridings they now represent.

Layton crafted the letter with the help of Topp, his wife, MP Olivia Chow, and his chief of staff, Anne McGrath.

During her last conversation with him on Saturday, McGrath said Layton was insistent that the coming leadership convention must be "motivating and energetic and something that would help with building the party and the movement."

McGrath acknowledged it's "going to be a challenge" to fill Layton's shoes. But she said he's leaving the party with some strong "underlying fundamentals" -- a revitalized fundraising machine and a growing membership.

"I think the key thing ... has got to be that we remember who he was and what he stood for and try and do what he wants us to do, which is to make sure that his legacy is one of building."

Topp railed at the injustice of Layton being felled by cancer before he could enjoy the fruits of eight long years of labouring to bring the NDP from the political wilderness to the brink of potential power.

"It is very unfair that, having gone so far and done so much, he doesn't have a chance to carry it forward," he said, echoing the sentiment of most New Democrats.

Still, Topp said New Democrats must adopt Layton's "hopefulness and his optimism" -- the qualities that endeared him to Canadians.

"Although no one can replace Jack Layton, we can continue his work. He taught us a lesson there that we will not forget about what it is that the people of Canada are looking for and it's an alternative to angry and small politics. And that's what Jack Layton was all about. He was about offering something bigger."

Another leader might adopt Layton's strategy but it's difficult to imagine any of his potential successors -- such as Montreal MP Thomas Mulcair, Vancouver MP Libby Davies and Ottawa MP Paul Dewar --matching Layton's sheer likeability.

His ability to connect with average folk was reflected in the coast-to-coast outpouring of grief that followed the early Monday statement from Layton's family.

"We deeply regret to inform you that The Honourable Jack Layton, leader of the New Democratic Party of Canada, passed away at 4:45 am today, Monday August 22," said the statement from his wife, Olivia Chow, and two children, Sarah and Michael.

"He passed away peacefully at his home surrounded by family and loved ones."

A funeral service is expected to be held Saturday at Toronto's Roy Thomson Hall. It is still unclear whether there will be any state involvement in the funeral for the leader of the official Opposition.

However, the family asked that in lieu of flowers, donations be made to the recently announced Broadbent Institute, a left-leaning think-tank.

Layton's death came a month after he appeared at a news conference, looking frail and gaunt, to announce he was suffering from a new, unspecified cancer and would temporarily step down as party leader and head of the official Opposition.

Rookie Quebec MP Nycole Turmel took over within days, but the caucus and party all expressed hope for Layton's quick return to health.

It was not to be.

Layton had been diagnosed with prostate cancer in early 2010, but continued a crowded schedule while getting treatment. He suffered a hip fracture just before the start of the spring campaign but it was surgically repaired. He leaned on a cane during the campaign, but seemed as full of energy and optimism as ever.

Toward the end of June, however, Layton began experiencing pain and stiffness. His condition swiftly deteriorated, leaving the once fit and athletic Layton looking emaciated and frail within just a few weeks.

The last federal political leader to die in office was Andre-Gilles Fortin, who was killed in a 1977 car crash eight months after becoming leader of the now-defunct Social Credit.

Sir Wilfrid Laurier was leader of the Liberals at the time of his death in 1919. Sir John A. Macdonald, Canada's first prime minister, died in office shortly after winning re-election in 1891. 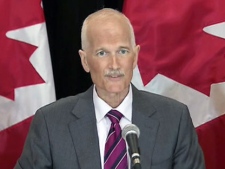 NDP Leader Jack Layton speaks to the media about his battle with cancer in Toronto on Monday, July 25, 2011. 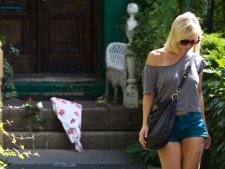