OTTAWA - Jack Layton's streaking NDP campaign was rocked Friday by a report that he visited a massage parlour 15 years ago -- a report the NDP leader immediately dismissed as a smear.

The NDP leader said he is being smeared in the final hours of a campaign that has his party poised to make a historic breakthrough, according to public opinion polls. Some of those polls suggest Layton could win enough seats on Monday to come within striking distance of taking power.

Layton was compelled to make an unscheduled appearance before cameras and microphones in this community on Vancouver Island to attack the timing of the report.

"It's unfortunate to see the smear campaign starting in these last few days of the campaign. Absolutely nothing wrong was done," he said.

"There was no wrongdoing here, yet the smears start. And you know, this is why a lot of people get turned off politics and don't even want to get involved."

Sun TV reported Friday that Layton was neither arrested nor charged during the 1996 incident that reportedly happened during a police raid. Layton was a Toronto city councillor at the time.

The television network is attributing the information to notes taken by police officers at the time.

Layton did not address the specific allegations in his unscheduled news conference, but a lawyer for the New Democratic party issued a stern warning about misrepresenting the issue.

"The facts are that Mr. Layton had obtained a massage from a massage therapist, but had no knowledge whatsoever that the therapist's location may have been used for illicit purposes," Brian Iler said in statement.

"Any statement or inference that Mr. Layton's actions or behaviour was other than the facts stated above would be without any factual basis, would clearly (be) made with malice, and ought not to be published."

Iler's statement added that Layton was told by police he did nothing wrong but that the location was questionable. It said Layton gave police his name and address and nothing further happened.

With the warning about publication ignored, New Democrat staffers said the party was "weighing all of its options" for further action.

The NDP campaign team was tipped off early Friday afternoon that the Sun network would be running a potentially damaging story that night, said a party official speaking on background.

They were aware of the "general nature" of the allegations, but did not see the specifics until the story ran.

Layton was not asked to comment ahead of time, but officials couldn't say whether the party war room in Ottawa was contacted.

Olivia Chow, Jack Layton's wife and a New Democrat incumbent seeking re-election in Toronto, issued a statement saying Layton told her about the incident at the time it happened.

"No one was more surprised than my husband when the police informed him of allegations of potential wrong doing at this establishment," Chow's statement read. "Any insinuation of wrongdoing on the part of my husband is completely and utterly false."

Chow's statement described the business as a "massage clinic" that was at the time registered with the City of Toronto.

But a Conservative staff member in Industry Minister Tony Clement's office did wade in, responding on Twitter to a reporter's comment about whether the story was legitimate.

"Is that a serious question? How could this not be relevant to Layton's character and credibility?" wrote Erik Waddell.

Earlier this week, the CEO of the parent company that owns Sun TV said the fledgling network was the victim of a smear campaign after it was passed erroneous information by the Conservative campaign about Liberal Leader Michael Ignatieff.

Layton didn't mention the allegations when spoke to about 700 people at rally in this scenic community.

Although he appeared perturbed while talking to reporters, his stump speech was even more animated than unusual.

Layton avoided waiting reporters afterwards, leaving the event through a side door. 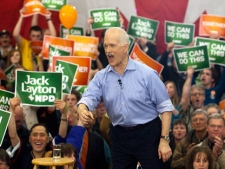 NDP Leader Jack Layton addresses supporters at a campaign rally in Courtenay, B.C. on Friday, April 29, 2011. The federal election will be held on Monday. (THE CANADIAN PRESS/Andrew Vaughan)