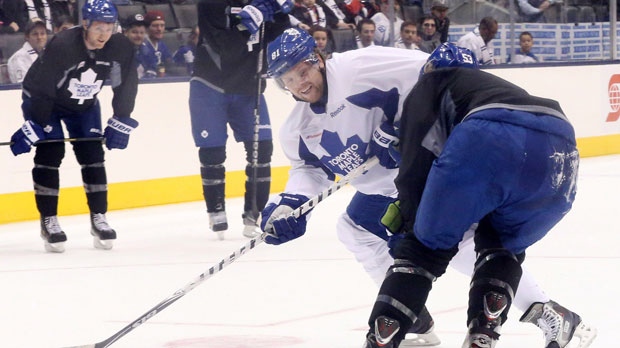 Toronto Maple Leafs Phil Kessel (left) goes through a drill with Mike Kostka (right) during an open training session at the Air Canada Centre in Toronto on Thursday, Jan. 17, 2013, as the Leafs prepare for their opening match of the new NHL season. (The Canadian Press/Chris Young)

Rielly, 18, was sent back to the Moose Jaw Warriors of the Western Hockey League. The Leafs could have still returned Rielly to junior after five regular-season games. But general manager Dave Nonis told reporters that while Rielly played well in camp, there were no exhibition games so they were unable to gauge how he would play against NHL-calibre talent.

Frattin will report to the American Hockey League's Toronto Marlies. Both Rielly and Frattin were able to be re-assigned without having to clear waivers, which likely factored into the decision.

The Maple Leafs also said that forward Tim Connolly has cleared waivers and will report to the Marlies.