Canada and the United States have always had "great" relations and any diplomatic cables that surface this week won't change that, Cannon said, nor should they be a matter of national concern.

"These leaked documents that pertain to Canada, in my view, it's not something that will harm relations," he said Monday.

"I want to assure everybody that I don't think this is going to change the strong relationship that we have with the United States."

The online whistleblower WikiLeaks confirms there will be as many as 2,648 documents referencing Canada among the quarter-million it plans to release this week.

The website has offered some hints about the broad range of Canada-related topics they cover, including arms control, CBC coverage, consular matters, energy technology and foreign trade.

Secretary of State Hillary Rodham Clinton telephoned a number of her counterparts on the issue over the weekend, including Cannon. The minister was also briefed by the U.S. ambassador to Canada.

Cannon said he's been told "in sketches" what might be in the documents relating to Canada. He mentioned references to Canada's "inferiority complex."

He said there is no indication anything contained in the documents is a matter of national concern, calling the leaks "an American issue."

"In terms of the significance of the documents as it pertains to Canada, I'm saying it's not that significant. . . . There's nothing there to be very alarmed about."

But at a news conference in Washington on Monday, Hillary Clinton had a different take.

"Let's be clear," she said. "This disclosure is not just an attack on America's foreign-policy interests, it is an attack on the international community.

"In addition to endangering particular individuals, disclosures like these tear at the fabric of the proper function of responsible government.

"Every country, including the United States, must be able to have candid conversations about the people and nations with whom they deal."

Despite his dismissal of the documents' significance in relation to Canada, Cannon called their publication "deplorable" and said the contents must be taken in context.

"This is raw information," he said. "Comments that are made, information that might be picked up here and there from pundits or other sources of information do not essentially constitute the foreign policy of a country.

"Obviously, diplomats speak. This has been like this since the beginning of time."

The criticism came as several international news organizations began publishing diplomatic cables given them in advance by WikiLeaks. Soon after, the cables were made available to the public through cablegate.wikileaks.org.

The documents touch on everything from the release of Guantanamo Bay prisoners and Iran's military capabilities to Libyan leader Moammar Ghadafi's eccentricities and U.S. efforts to spy on United Nations officials.

U.S. Attorney General Eric Holder said Washington would prosecute if violations of federal law are found in a criminal investigation of the incident.

The weekend release of documents reflecting, in some cases, unflattering assessments of world leaders has embarrassed the U.S. administration.

The leaks disclosed bluntly candid impressions from both diplomats and other world leaders about America's allies and foes. 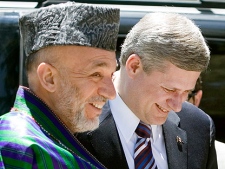