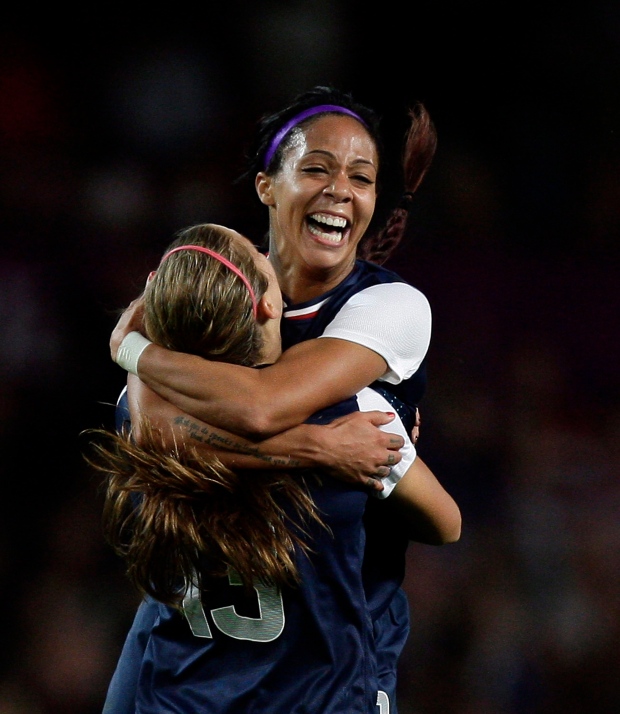 TORONTO -- Sydney Leroux showed some love for Toronto after an emotional 24 hours that saw the Canadian-born U.S. soccer international inflame passions with a cheeky goal celebration and a tweet about racial slurs.

But while calling the atmosphere at Sunday's Canada-U.S. game in Toronto a "positive step forward for women's soccer," Leroux revealed she had been racially abused in her birthplace of Vancouver during last year's Olympic qualifying tournament.

The Canadian Soccer Association, while adding its voice against racism, noted that no complaint was ever filed at the time. Leroux, U.S. Soccer said, had chosen to stay silent.

But Leroux's open-ended tweet Monday opened up the issue.

The rising star, who was booed throughout Sunday's match by the soldout crowd at BMO Field, scored the final goal in the 3-0 U.S. win.

In celebrating her stoppage-time goal, she popped out her jersey to show the U.S. crest and put a finger to her mouth as if silencing the crowd.

On Monday morning, the 23-year-old -- who was born in Vancouver to a Canadian mother and American father -- took to Twitter to explain her actions.

"When you chant racial slurs, taunt me and talk about my family don't be mad when I shush you and show pride in what I represent. .america," Leroux tweeted.

The timing of the tweet led many to assume that the racial slurs in question happened at the game in Toronto.

Not so, U.S. Soccer clarified later in the day after the story took off. Leroux's tweet "was not in response to anything heard" at BMO Field, the U.S. governing body said in a statement.

U.S. Soccer said Leroux "has endured abuse both verbally and in social media," since switching her international allegiance from Canada to the U.S. in 2008.

"The racial slurs to which she referred in the tweet occurred during the 2012 Olympic Qualifying Tournament in Vancouver in January of 2012 and revolved around her father, who is African-American," said the statement. "At the time, she chose not to address them.

"Since the match (Sunday), she has received a significant number of tweets that contained racial slurs, and her tweet this morning was in response to the last year and half in which such abuse has occurred more frequently.

In the statement, Leroux also offered her own explanation:

"My tweet from this morning wasn't in response to anything from yesterday's match at BMO Field. In fact, the atmosphere at the stadium was a positive step forward for women's soccer," she said.

"Unfortunately, the type of abuse I have received in the past and via social media for my decision to play for the United States is a step backwards. That is what prompted my response in the heat of the moment.

"It is sad that people are inclined to write these incredibly negative comments, but I am not going to focus on them moving forward. Racism has no place in our beautiful game and we all need to come together to make sure no players are subjected to this kind of treatment in stadiums or on social media anywhere in the world. That said, the majority of fans have been extremely positive and I appreciate their support."

Sunday's game, a much anticipated rematch of last summer's Olympic showdown won 4-3 by the Americans in controversial fashion after extra time, drew a BMO Field record crowd of 22,453.

Leroux drew boos and chants of "Judas" during the Olympic qualifying in Vancouver.

"I'm happy to wear this jersey, and that's how it is."

The Canadian Soccer Association released its own statement Monday.

"The Canadian Soccer Association is aware that U.S. Soccer national team player Sydney Leroux has indicated having been the target of racial abuse at the 2012 CONCACAF Women's Olympic Qualifying tournament held in Canada. At that time, no CONCACAF or Canadian Soccer Association officials were informed nor was any formal report filed by Leroux or U.S. Soccer," the statement read.

"The Canadian Soccer Association is a proud supporter of fair play and respect in sports, and will not tolerate discrimination on or off the pitch. We would also ask of all Canadian soccer fans that they hold themselves to these same standards when enjoying the beautiful game."

As for the goal celebration, Leroux downplayed it after Sunday's game.

"Come on ... how many American-born players do you have on Canada?" said Leroux, who was yellow-carded for her celebration.

"I thought I dealt with it well."

The seventh-ranked Canadian squad includes defender Lauren Sesselman, who was born in the U.S. Coach John Herdman is said to be examining other U.S. options.

American captain Abby Wambach also spoke up for her teammate.

"If you knew some of things that Canadian folks tweet at her, that for her was a special moment, and that for her was saying, 'Hey look, I'm here, I'm on the U.S. team,"' Wambach said. "So for her, I'm proud of her to come on in the time that she had."'

Leroux's mother played third base for the Canadian national softball team while her father played for the Anaheim Angels.

At 14, Sydney was part of the Canadian team at the 2004 FIFA U-19 Women's World Cup in Thailand, where she was the youngest player in the tournament. She was captain of Canada's under-15 team before moving to the U.S. at 15 with an eye to earning a college scholarship and playing for the U.S. team, according to U.S. Soccer.

She played at UCLA and is currently a member of the Boston Breakers of the National Women's Soccer League.

Leroux's weekend actions drew a quick response from Canadian news outlets, even before any mention of racism was introduced.

"Sydney Leroux scores goal, acts boorish," was the headline on The Score website.

"Canada has a meltdown over Sydney Leroux goal celebration," said the National Post.

And The Voyageurs supporters group, whose section of the stadium is near where the American forward celebrated, put out a statement,

"We really shouldn't need to address this, but given the firestorm created by an accusation coming from one American player this morning, a reminder to everyone: We have zero tolerance for racist behaviour," the statement read.

"Anyone engaging in this type of behaviour is not representative of the Voyageurs, and is not welcome in our sections."

Booing the return of players who have left for another team is common in soccer, however.

And players change international allegiance around the world. But Canadians are perhaps especially sensitive to the issue given past defections from a men's team that is currently ranked 80th in the world.

Owen Hargreaves (England), Jonathan de Guzman (Netherlands) and Asmir Begovic (Bosnia and Herzegovina) are just some of the recent Canadians who have elected to play for another country.

Canada has not shied away from snapping up players with eligibility from other countries, however.

As for scoring against former teams, there are usually two approaches: wildly rubbing it in or not marking the moment at all, as former Arsenal striker Robin van Persie did when he scored against the Gunners for Manchester United this season.