OTTAWA - Bob Rae is predicting a bright future for liberalism in Canada as he takes on the daunting task of rebuilding the shattered federal Liberal party.

The high-profile Toronto MP was chosen interim leader Wednesday by a much-diminished Liberal caucus. His appointment was quickly approved by the party's national board of directors and is likely to last for up to 22 months before a permanent new leader is elected.

Rae acknowledged the party is in dire straits following its historic defeat in the May 2 election, which reduced the Liberals to a third-party rump with only 34 MPs. Michael Ignatieff resigned as leader after losing his own seat.

"The people of Canada gave the Liberal party a very clear and tough message in the last election," said Rae, a former NDP premier of Ontario. "It's a message that we have received and understood.

Still, Rae rejected suggestions the self-described "natural governing party" is in its death throes or that the Harper government's determination to eliminate the $2-per-vote subsidy for political parties will hasten its demise.

Rae said the party has to become more of a "movement," taking on causes and issues that matter to liberal-minded Canadians and reflecting their values. Among other things, he said that includes "a profound belief" in the Charter of Rights, respect for diversity, a dislike of authoritarianism, narrow-mindedness and "the bumper sticker approach to government," and a determination to "move beyond ideology."

"I think these are ideas that are very widely felt throughout the country and there are a lot of liberals out there who may not have a formal Liberal party membership but who feel that way. And I think those are the people to whom we have to appeal."

As a first step towards restoring Liberal fortunes, Rae said the party must re-engage with rank-and-file members to become as open, transparent and accountable as possible.

Rae was chosen as interim leader by his 33 fellow MPs and 45 Liberal senators over Marc Garneau, a Montreal MP and former astronaut.

He had to give up his long-term leadership ambitions to take the post and promise not to engage in any discussions about a possible merger with the NDP -- conditions demanded by the party's national board.

While party brass could conceivably change the rules in future to allow him to run for the permanent leadership, the 62-year-old Rae said he's made a pact with his wife to serve only as interim leader.

"I also have no qualms about saying this is a limited term that I've accepted and I look forward to working within that term."

The precise length of Rae's term is uncertain.

Under the party's constitution a vote to choose a permanent successor to Ignatieff should take place by late October. However, the board is staging a "virtual" convention next month to ask Liberals to amend the constitution in order to postpone a leadership vote until sometime between Nov. 1, 2012 and Feb. 28, 2013.

Delegates to the online convention may choose to shorten or lengthen that time frame. 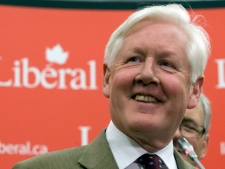