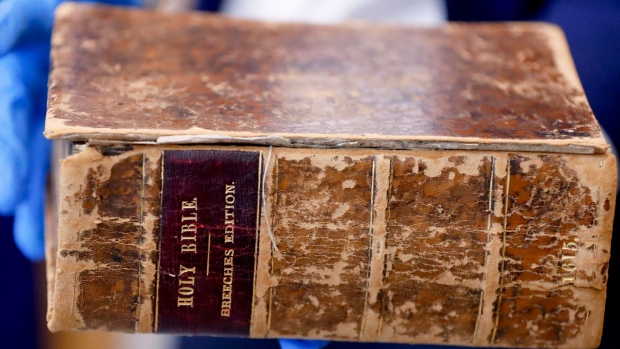 FBI supervisory special agent Shawn Brokos shows the recovered 1615 Breeches Edition Bible during a news conference, Thursday, April 25, 2019, in Pittsburgh. The Bible was stolen from the Carnegie Library in Pittsburgh in the 1990's. It was traced to the American Pilgrim Museum in Leiden, Netherlands. (AP Photo/Keith Srakocic)

PITTSBURGH - A 400-year-old Bible stolen from a Pittsburgh library has been recovered in the Netherlands and is now back in the U.S.

The FBI returned the stolen Geneva Bible, dating back to 1615, on Thursday.

Authorities say the Bible was similar to one brought over on the Mayflower.

The Bible was among more than 300 rare books, maps, plate books, atlases and more that were discovered missing from the Carnegie Library last year.

A former archivist at the library and a rare book dealer are accused of stealing more than $8 million of those books.

The American Pilgrim Museum in Leiden purchased the book privately, but authorities are not saying from whom it was purchased. The museum discovered the book was stolen after the theft charges were made public last year.