A Canadian traveller's airport survival guide: what to pack, what to leave behind 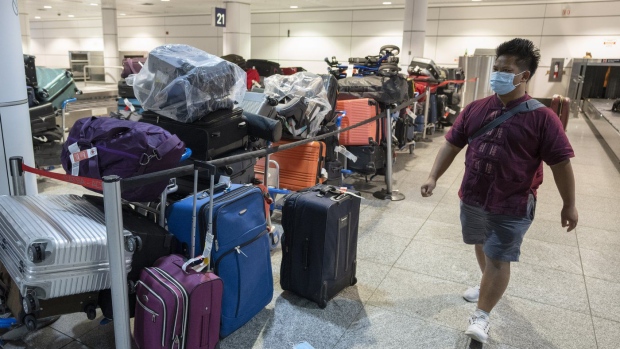 A passenger looks for his luggage among a pile of unclaimed baggage at Pierre Elliott Trudeau airport, in Montreal, Wednesday, June 29, 2022. There's one prevailing piece of advice when it comes to managing air travel in 2022: "pack your patience." But from booking a flight to landing at your destination, industry insiders are sharing some pro tips to make the process as smooth as possible. THE CANADIAN PRESS/Ryan Remiorz

There's one prevailing piece of advice when it comes to managing air travel in 2022: “pack your patience.” But as flight cancellations and delays continue, there are also some steps you can take to make the process as smooth as possible, industry insiders say. From avoiding peak times to packing a luggage tracker, here are their tips.

Before you head to the airport, make sure you have all your documentation in order, said Leila Lavaee, the founder of a Toronto-based travel agency.

Whether it's your passport, your boarding pass, your proof of vaccination or evidence of a negative COVID-19 test, figure out what you need to get on the plane and make sure it's easily accessible before you leave home.

It's also a good idea to download your airline's app, she said, along with Flighty, a third-party app for tracking flights. That way, you'll have up-to-the-minute information about your flight's status.

And finally, she suggested signing up for your airline's loyalty program to get a leg up.

“Airlines are now increasingly wanting to ensure their loyal customers have a better experience,” Lavaee said. “There are shorter lines and specific counters for you if you've got status with an airline.”

This is the best thing you can do to avoid headaches at the airport, said Martin Firestone, a travel insurance broker in Toronto.

Each layover is a chance for something to go wrong, be it a delayed flight that leads to a missed connection or a checked bag that gets lost.

“If you get backlogged, it's like a domino effect,” he said.

Booking a flight during peak times is a recipe for disaster, said Richard Vanderlubbe, president of tripcentral.ca.

If you're flying out of Toronto Pearson Airport, for example, he said to avoid a morning departure. On your way back, avoid a late-afternoon/early evening ETA.

Checking your flight status online, in addition to relying on email alerts, is also a good idea, he said.

And last-minute bookings could cause problems, Vanderlubbe said.

“Don't cut things too close - avoid 'just in time' flights for important events (such as) weddings, funerals, business meetings,” he said. “Get in a day early if you can.”

Lost and delayed luggage has become a hallmark of the modern travel tale, so if you can get away with packing just a carry-on - without going over the recommended weight limit - that's your best bet, Vanderlubbe said. But he warned that an overstuffed carry-on could create an even greater headache.

For those who must check luggage, he encouraged people who are travelling with a companion to pack a couple of their items in the other person's suitcase, to mitigate the impact of a single lost bag.

Firestone, meanwhile, said some of his clients have had luck attaching a tracker like the Apple Air Tag to their luggage so that even if their airline loses their bag, they'll know where it is.

It's helpful to think of “airport time” like you would “plane time,” said Lisa Gerlsbeck, a travel agent with PureMagic Vacations who works out of Kingston, Ont.

“You bring stuff on that plane to keep your kids busy and entertained for those two hours or whatever it might be. Treat the airport like that because it could be that long as well,” she said.

If you're travelling with children, prepare to let them have more screen time than usual, Gerlsbeck said. If you have old, outdated smartphones lying around the house, this is their time to shine: hand them to the kiddos and let them take pictures and video documenting the journey at the airport, or download a couple games they can play.

It's also worth downloading a few extra movies for kids and adults alike, she said.

For an analogue option, Gerlsbeck suggested sticking a pack of cards in your carry-on.

Landing is just the beginning

The deboarding process is not what it used to be, Gerlsbeck said. Typically, only those with connecting flights are let off the plane right away. Everyone else disembarks in zones - a lengthy process that could leave some unlucky folks sitting on the tarmac for hours.

For that reason, she suggested using the washroom before the descent begins and the seatbelt light turns on.

And don't treat landing like the end of the plane journey, she said.

“We all got very used to, as soon as you landed, you stood up, you started gathering your items. Don't do that,” she said. “Stay seated. I tell my clients, the kids won't even realize they're landed if Buzz Lightyear keeps playing.”