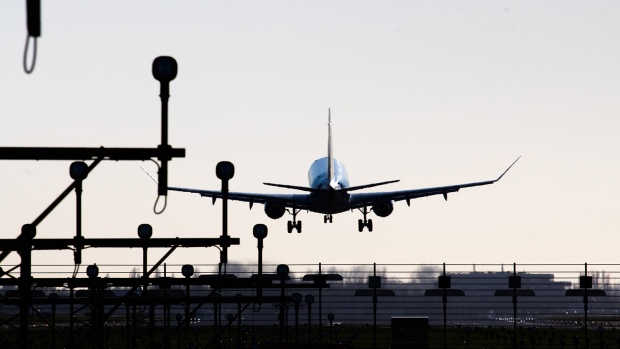 Dutch authorities discovered a stowaway hiding in the nose wheel of a cargo plane when it landed at Amsterdam's Schiphol Airport Sunday morning. (Nicolas Economou/NurPhoto/Getty Images via CNN)

(CNN) -- Dutch authorities discovered a stowaway hiding in the nose wheel of a cargo plane when it landed at Amsterdam's Schiphol Airport Sunday morning.

The man had been hiding for more than 11 hours since the plane departed from Johannesburg, South Africa, according to a spokesperson at Schiphol airport and police. While the individual was not identified, officials said he is believed to be between 16-35 years old.

"We learned that a person was found having stowed away on a cargo plane at the airport's cargo platform, this morning," Schiphol Airport spokeswoman Willemeike Koster told CNN. The Dutch Royal Military Police is handling the situation, Koster said.

Airport ground crew first spotted something that looked like a person and immediately notified authorities. Upon reaching the scene, Dutch police and emergency services confirmed the man was alive but with a low body temperature, Royal Dutch Military Police spokeswoman Joanne Helmonds said.

"We were surprised upon finding this man but even more surprised at him being alive after the plane flew over 10,000 [kilometers] in very, very cold temperatures," Royal Dutch Military Police spokeswoman Joanne Helmonds told CNN.

The man was revived and stabilized at the airport and then transported to a hospital in Amsterdam, Helmonds added.

"When the man has recovered and cleared by the hospital, he will then be processed at the Asylum Seekers Centre (AZC) where his status will be determined if he indeed is looking for asylum," Helmonds said.

Flight times between Johannesburg and Amsterdam average about 11 hours, and if the flight had a stopover in Kenya, the journey would have been several hours longer, according to Royal Dutch Military Police,

Cargolux, the Luxembourgian cargo airline the stowaway was aboard, declined to comment on the news until an investigation into the situation is complete.