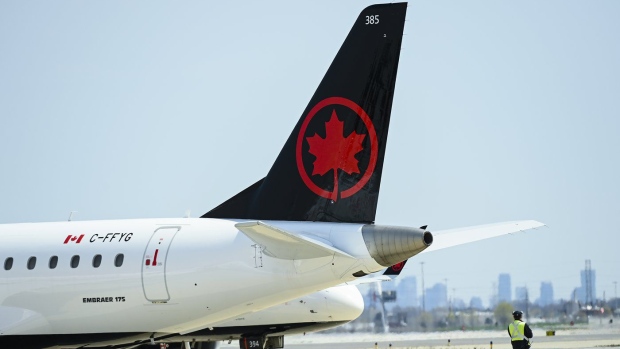 Airline ground crew walks past grounded Air Canada planes as they sit on the tarmac at Pearson International Airport in Toronto on Tuesday, April 27, 2021. THE CANADIAN PRESS/Nathan Denette

MONTREAL - Air Canada is looking to avoid a repeat of this past summer's widespread disruptions as it heads into the busy holiday travel season.

The company learned valuable lessons during the “operationally challenging” summer months that it is applying to current operations as travel demand continues to bounce back, said chief executive Michael Rousseau on Friday.

After operational improvements in late summer, the airline is now performing at pre-pandemic levels as it continues to increase staffing numbers, he said in a news release.

“We sincerely regret any inconveniences that have occurred,” said Rousseau.

With the cancelled flights and airport gridlock of the summer still fresh in the minds of many travellers, he looked to reassure passengers about the lessons the airline has learned.

“With customers booking their winter and holiday getaway travel, they can have full confidence in our ability to carry them safely and conveniently.”

While travel disruptions continued throughout July, there were improvements in August and September that helped see Air Canada transport around 11.5 million passengers in the third quarter and reach its first positive operating income since the pandemic began.

The positive results drove the airline's shares up 3.7 per cent to above $20 Friday morning, the highest the stock has been since June when operational disruptions began.

The airline said it had $644 million in operating income for the quarter, compared with an operating loss of $364 million in the third quarter of 2021.

An unfavourable foreign exchange rate added to the high price of aircraft fuel, which increased more than 80 per cent from the third quarter of 2021, said Amos Kazzaz, chief financial officer for Air Canada.

An improved passenger load of 86 per cent, up from 71 per cent in 2021, also helped to mitigate these costs, as fuller planes also led to better than expected cost per seat reductions, said Spracklin.

Overall, Air Canada reported a net loss of $508 million in its third quarter compared with a loss of $640 million in the same quarter last year as it ramped up operations and more than doubled its revenue.

This report by The Canadian Press was first published Oct. 28, 2022.