Airbnb aims to convince more people to rent out their homes 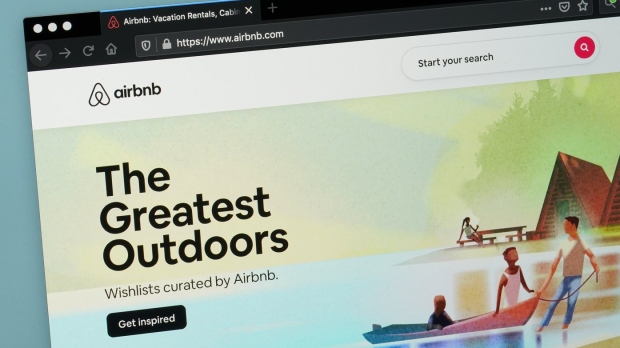 FILE - Airbnb's website is displayed on a web browser on May 8, 2021, in Washington. Airbnb is looking for more people to turn their homes into short-term rentals. The company said Wednesday, Nov. 16, 2022, that it is rolling out a simpler process of enrolling, with online help from a “superhost.” (AP Photo/Patrick Semansky, File)

Convinced that the boom in leisure travel is permanent, Airbnb aims to expand its listings by convincing more people to turn their homes into short-term rentals.

The company said Wednesday that it will increase the amount of liability coverage for hosts, up to $3 million, in a play for owners of nicer houses in high-cost places such as California. It will also pair newbies with a “superhost” to guide them through the process of becoming a short-term landlord, from signing up through welcoming their first guest.

More listings would not seem to be Airbnb's biggest challenge.

CEO Brian Chesky says the San Francisco company is taking steps to make price more transparent when consumers browse Airbnb listings, and he predicts that will reduce sky-high cleaning fees that many hosts tack on well into the booking process — a major complaint of consumers.

The company also continues to try to crack down on large parties at rentals, a few of which have turned violent. And it faces efforts to increase regulation of short-term rentals.

Through it all, Airbnb has fared better than most travel companies during the pandemic. This month, it reported a record $1.21 billion profit for the third quarter. Its stock fell, however, because earnings and bookings were less than Wall Street expected and the company gave a cautious fourth-quarter outlook.

Investors worry that consumers paying more for food, gas and housing — and facing predictions of recession — will cut back on discretionary spending like travel, hurting Airbnb.

Some current hosts are worried that might already be happening. Last month, a post on a Facebook page for Airbnb “superhosts" asked, “Has anyone seen a huge decrease in bookings over the last 3 to 4 months? We went from at least 50% occupancy to literally 0% in the last two months.”

Other hosts on social media have suggested theories ranging from a fragile economy to pent-up travel demand finally running out, and some think the problem might be that Airbnb already has too many listings.

AirDNA, which tracks short-term-rental numbers, said Airbnb listed nearly 1.4 million rentals in the U.S. in September, a 23% jump from a year earlier and 9% over 2019. Nearly two-thirds were added since 2020. The trends are similar for global listings.

Chesky said in an interview that Airbnb has enough hosts now — he didn't say it has too many — but needs more because leisure travel will keep growing. And, he said, a recession could push more people to turn their homes into Airbnbs. After all, he likes to point out, Airbnb launched during the great recession in 2008.

“People are pulling back spending in tons of areas, but not travel," he said. "And with a looming recession, we felt like more people than ever are going to want to make extra money.”

Potential hosts sometimes hesitate, Chesky said, because they are uncomfortable having strangers in their homes. The company's response is to triple the amount of coverage for hosts — from $1 million to $3 million — against damage, including to vehicles, boats and a wider range of art on the property.

Chesky is betting that will persuade more owners of nice homes to list them on Airbnb.

“Exactly, and home values have increased since we wrote the $1 million plan,” he said. “We just noticed more than 20% of the homes on Airbnb, and maybe even more than that, were over the $1 million limit in value.”

The company said it is also launching a system to verify the identity of guests and flag potential parties, immediately in the U.S. and Canada and worldwide by next spring. Chesky said the system is “not a silver bullet,” and he didn't provide many details but said in the U.S. it will include a check of criminal and sex-offender records.

In the meantime, the company is working on a plan to display the all-in price of a stay up front on its app and website — an amount that would include cleaning fees, which can be very high and only appear later in the booking process.

Chesky said he didn't want to bar or cap cleaning fees — that's a decision for hosts, he said. But including fees in the upfront price — and in the order in which search results are displayed — “is going to correct the market,” he said.