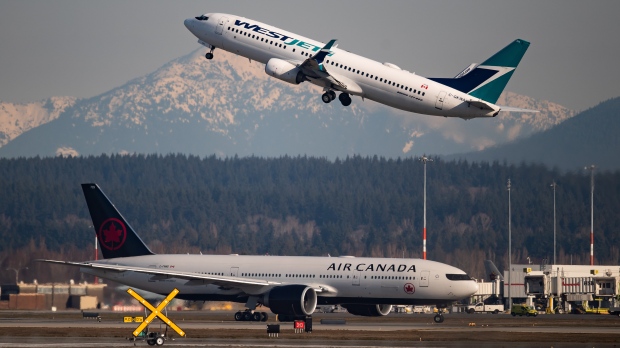 An Air Canada flight departing for Toronto, bottom, taxis to a runway as a WestJet flight bound for Palm Springs takes off at Vancouver International Airport, in Richmond, B.C., on Friday, March 20, 2020. THE CANADIAN PRESS/Darryl Dyck

MONTREAL - Canadian airlines say flights to the U.S. remain unaffected by the rollout of new 5G wireless technology that has sparked blowback from many large carriers.

Several international airlines cancelled flights to the United States this week over concerns that 5G mobile phone service could interfere with aircraft technology.

Critics say the new C-band 5G service operates in a frequency range that could interfere with radio altimeters, which measure an aircraft's height above the ground and help pilots land in low visibility.

Air Canada, WestJet Airlines Inc. and Transat A.T. say no flights to the U.S. have been cancelled due to the issue.

“WestJet has not identified any material risk to our operations regarding the rollout of 5G across Canada,” spokeswoman Denise Kenny said in an email.

Airlines for America, a trade association representing 10 U.S. airlines and Air Canada, warned in a letter to the U.S. government Monday that “the vast majority of the travelling and shipping public will essentially be grounded” if the rollout goes ahead as initially planned. The 50 biggest American airports would have been subject to flight restrictions, prompting cancellation of some 1,100 flights, the organization said.

Last fall, the federal Industry Department established protective measures, including so-called exclusion zones near airports, to reduce any interference with radio altimeters while allowing deployment of 5G systems in the 3,500-megahertz band in Canada. (The planned 5G rollout by American telecoms falls between 4,200 and 4,400 megahertz.)

It also imposed a “national antenna down-tilt requirement” on telecoms to protect helicopters and planes used in low-altitude military and search and rescue operations as well as medical evacuations, “which by nature do not fly predictable routes into and out of major airports,” the department's Nov. 18 decision reads.

“It is expected that as new information and studies become available, and as new radio altimeter standards are developed internationally, these measures may be modified or relaxed,” Industry Department spokesman Hans Parmar said in an email.

John Gradek, head of McGill University's aviation management program, said 5G networks in Canada run at lower wireless speeds that would not interfere with landings, and that only some older planes whose technology has not been upgraded pose a risk in the U.S.

“The question you have to ask yourself is, are the airlines investing in what I would call hardening the radio altimeter equipment so it no longer gets interfered with by C-band 5G?” he said in a phone interview.

“People knew this was coming. The airlines could have done something to invest in their airplanes to get the equipment in place, but they have not. We all know it's money - airlines are kind of short on money these days.”

“Between the commissioners of the Federal Aviation Administration - the FAA - and the Federal Communications Commission - the FCC - there's an abject failure of decision making on behalf of the Biden administration,” he said in a phone interview.

“This is the biggest aviation market in the world. For this to happen - after the Boeing 737 Max oversight issue - you've got to scratch your head and wonder: what is going on in that country?”

The wave of cancellations by some airlines will carry “ripple effects” for carrier schedules around the world, he added.

On Wednesday, Emirates announced it would halt flights to several U.S. cities due to “operational concerns associated with the planned deployment of 5G mobile network services” at certain airports. It said it would continue flights to Los Angeles, New York and Washington.

Emirates president Tim Clark pulled no punches when discussing the issue. He told CNN it was “one of the most delinquent, utterly irresponsible” situations he'd ever seen as it involved a failure by government, science and industry.

Of particular concern appears to be older Boeing 777 wide-body jetliners. Emirates only flies that model and the Airbus A380 jumbo jet - and it was among one of the most affected airlines.

Japan's All Nippon Airways cancelled 20 flights to cities such as Chicago, Los Angeles and New York after the U.S. Federal Aviation Administration “indicated that radio waves from the 5G wireless service may interfere with aircraft altimeters,” the carrier said. Along with Japan Airlines, it said Boeing announced restrictions on airlines flying its 777s.

Air India also announced on Twitter it would cancel flights to Chicago, Newark, N.J., New York City and San Francisco because of the 5G issue. But it also said it would try to use different aircraft on U.S. routes - a course several other airlines took.

In Canada, the industry and transport departments are working with the telecom and aviation sectors “to ensure that appropriate rules are in place to protect the critical operations of radio altimeters” and minimize potential interference, Transport Canada spokeswoman Sau Sau Liu said in an email.

Transport Canada also issued a civil aviation alert on Dec. 23 offering recommendations on how to fly an airplane “in a 5G environment,” she noted.

This report by The Canadian Press was first published Jan. 19, 2022.

Companies in this story: (TSX:AC, TSX:TRZ)