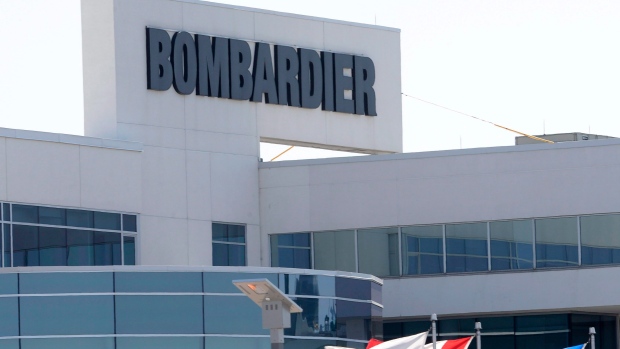 Flags fly outside a Bombardier plant in Montreal on May 14, 2015. Bombardier Inc. has signed a deal to sell its aerostructures business to Spirit AeroSystems Holding Inc. (THE CANADIAN PRESS/Ryan Remiorz)

MONTREAL - Bombardier Inc. has signed a US$1.2-billion deal to sell its aerostructures business as the plane-and-train maker continues its shift toward business jets and railcars.

Spirit AeroSystems Holding Inc. has signed a definitive agreement with the Montreal-based company to buy its factories in Belfast, U.K., and Casablanca, Morocco, as well as its maintenance plant in Dallas.

Under the agreement, Spirit will pay US$500 million in cash and assume liabilities of more than US$700 million.

Spirit is expected to continue to manufacture the wings of the Airbus A220 - Bombardier sold a majority stake in the plane program, formerly branded the C Series, to Airbus last year - and other structural components and spare parts for the Learjet, Challenger and Global aircraft families in Bombardier's aviation division.

The sale announcement came as the company announced earnings that fell below expectations.

He said he views the sale “positively...as it further focuses Bombardier on the two core areas of business jets and transportation, while adding further liquidity,” he said in a note to investors.

Despite several project delays and lower-than-expected margins in its train division, Bombardier is “indicating that it has turned the corner on the large problematic legacy contracts,” Spracklin said.

Bellemare said the company is on track to reach its 2019 forecast of 15 to 20 Global 7500 business jet deliveries, despite sending off only two last quarter. Next year Bombardier aims to deliver between 35 and 40 of the ultra-long-range 7500s, which can fly from Halifax to Hong Kong.

“We are pleased with the company's progress on the Global 7500, which should be a key driver of margin expansion and free-cash-flow generation,” said Desjardins Securities analyst Benoit Poirier.

The company's stock rose more than four per cent or seven cents to closed at $1.66 in Thursday trading on the Toronto Stock Exchange.

Revenue fell two per cent year over year to $3.72 billion in the quarter ended Sept. 30.

Analysts on average had expected a loss of three cents per share, according to financial markets data firm Refinitiv.

This report by The Canadian Press was first published Oct. 31, 2019.