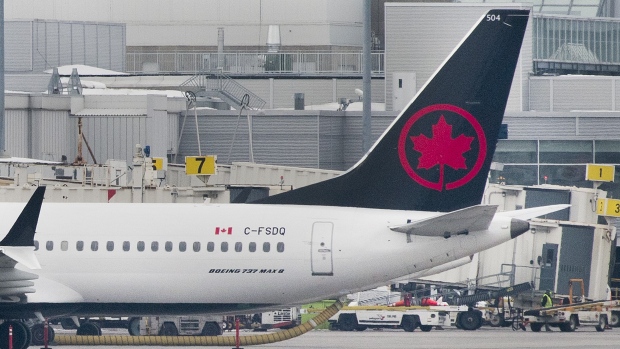 An Air Canada Boeing 737 Max 8 aircraft is shown next to a gate at Trudeau Airport in Montreal on March 13, 2019. Transport Minister Marc Garneau says he has spoken with Air Canada about problems continuing to plague its new booking system, but that his department "cannot do anything." THE CANADIAN PRESS/Graham Hughes

The airline introduced the reservation system on Nov. 18, triggering a barrage of social media complaints from passengers who had difficulty accessing their booking information or reaching customer service agents

Edmonton resident Ray Stuive tried to cancel an upcoming flight home from Las Vegas after Air Canada notified him that his trip would be rerouted through Montreal on an overnight layover, which would land him back in Edmonton about 20 hours later than planned.

“I'm trying to phone in and cancel a flight. I'm not getting any help,” said Stuive, 55.

The home builder said he's called a half-dozen times over the past 10 days to cancel his flight but could not even get on hold, with one exception, “but it hung up on me in five minutes.”

Stuive wound up booking a January flight with WestJet.

“I'd like my money back from Air Canada. Will I ever get it? I don't know,” he told The Canadian Press.

Calls to the customer service line Wednesday went straight to a voice recording from department director Jean-Francois Loignon, who apologized for the “delay” and asks customers not flying within 24 hours to consult their travel plans online.

“Due to current volumes, I apologize that we are not able to place you on hold at this time,” he said.

Transport Minister Marc Garneau said Wednesday he has spoken with Air Canada about the ongoing problems, but that resolving them is beyond his reach.

“We've let them know that we're hearing from a lot of customers that they're very frustrated and that they're also having trouble getting through a customer relation site at Air Canada,” Garneau said.

“They're doing their best to fix it. It is something that is in the hands of Air Canada. Transport Canada cannot do anything.”

Air Canada said in an email Wednesday that it is “working to resolve the issues as soon as possible.”

“This was a massive IT project, which occurred over two years and involved 700,000 hours of development. With an IT project of such complexity, issues are inevitable,” the airline said.

Many concern passengers who are changing their bookings, but “most customers have not been impacted and they continue to travel normally.”

The second phase of a new set of passenger rights rules is set to come into effect on Sunday, but passenger rights advocate Gabor Lukacs says they are “toothless” when it comes to the latest problems.

“Air Canada cannot avoid its obligations to passengers by making itself unreachable,” he said.

The upcoming batch of regulations mandates compensation of up to $1,000 for delays and other payments for cancelled flights if the situation is defined as within the airline's control.

The rules impose no obligation on airlines to pay customers for delays or cancellations if they were caused by mechanical problems discovered in a pre-flight check - walking around the aircraft before takeoff looking for defects - rather than during scheduled maintenance.

The issue came to the forefront after a 2017 incident in which two Montreal-bound Air Transat jets were diverted to Ottawa due to bad weather and held on the tarmac for up to six hours, leading some passengers to call 911 for rescue.

The Canadian Transportation Agency is responsible for ensuring air carriers abide by their tariffs - airlines' contract with customers - Lukacs noted. Air Canada's tariff stipulates that “the carrier will effect a change in the routing...travel dates, or will cancel a reservation” at the passenger's request.

“If Air Canada frustrates that process, it is not doing its part of the bargain,” Lukacs said.

The agency said it is aware of Air Canada's booking issues and is monitoring the situation.

“If passengers feel that an airline has not applied its tariff, or if they wish to contest the conditions contained in its tariff because they are unclear, unreasonable or discriminatory, they can file a complaint with the CTA by going to AirPassengerProtection.ca,” the agency said in an email.

The phone delays are longer for travel agents too, said a spokesman for the Canadian Automobile Association's Quebec affiliate, which operates a travel agency with 14 centers.

The new reservation system, dubbed Amadeus Altea, is also used by other major airlines such as British Airways and Air France.