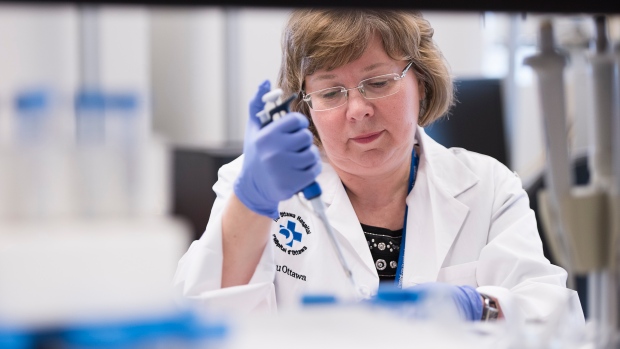 The study, published Wednesday in the medical journal Clinical Cancer Research, says the drug metformin may be able to halt and possibly reverse scarring of the ovaries that occurs with age.

Lead author Curtis McCloskey, who is now a postdoctoral fellow at Toronto's Princess Margaret Cancer Centre, says one of the primary risk factors for ovarian cancer is the number of ovulations a woman has throughout her lifetime.

McCloskey, who performed the study while he was a PhD student at the University of Ottawa, adds that is why the birth control pill, which blocks ovulation, reduces women's risk of the disease.

“The ovary is constantly in a state of change, growth and retraction,” McCloskey explains. “That causes what we call a wound response, so the ovary essentially has to fix itself. When that happens repeatedly, you can get scarring ... or fibrosis.”

The research team examined 27 ovaries removed from women between the ages of 21 and 82. McCloskey says most of the ovaries from post-menopausal women were fibrotic.

But there was one outlier - an ovary from a 69-year-old woman.

“I was all excited that a lot of the ovaries that I was looking at fit with the hypothesis we had that post-menopausal would have more of this scarring,” McCloskey says.

After consulting with the research team's pathologist, they discovered that the woman had Type 2 diabetes and had a long history of taking metformin.

“This rang a bunch of bells because I was familiar with a study done in 2015 that showed that diabetic women who took metformin had up to an 80 per cent reduction in the risk in developing ovarian cancer,” he says.

“And there weren't many studies that followed up on how this might be happening.”

Barbara Vanderhyden, chair of ovarian cancer research at the University of Ottawa who helped in the study, says the finding is promising because fibrosis creates a niche where cancer cells like to live and grow.

“Of course, if there are no cancer cells around, it's not a problem. But if there are cancer cells that develop or that land there, then you have a higher risk of tumours starting to grow in that niche,” Vanderhyden says.

Ovarian cancer is the fifth most common cancer in women, and among the deadliest, with a five-year survival rate of 45 per cent. Women who have a family history of ovarian cancer or a mutation of the BRCA gene are at greatest risk of the disease, Vanderhyden says.

“It's not very common to detect the cancer early and the outcomes don't differ from the ones that are diagnosed a little later,” she says. “The only prevention strategy that is currently in play is actually removal of the reproductive tissues, which is obviously a rather dramatic solution.”

Although oral contraceptives also reduce the risk of ovarian cancer, it is not as effective removing the ovaries and fallopian tubes, Vanderhyden says.

“Our goal is to find a middle ground, where women who still are having children or still wanting to have children but are known to be at high risk, might have something that they can take that would reduce that risk until the point where they feel more comfortable in having their reproductive tissues removed,” she says.

McCloskey says he hopes to see scientists go further with the study by examining patients in an non-invasive way.

He suggests doing tests similar to a mammogram to detect the state of a woman's ovaries, and giving her metformin for a year to see if the fibrosis goes away.

“Some sort of method like that would have to be developed, I think, to monitor if the drug is doing what we think it's doing in patients.”

This report by The Canadian Press was first published Oct. 9, 2019