Digital art by Beeple sells for $69.4 million amid NFT boom 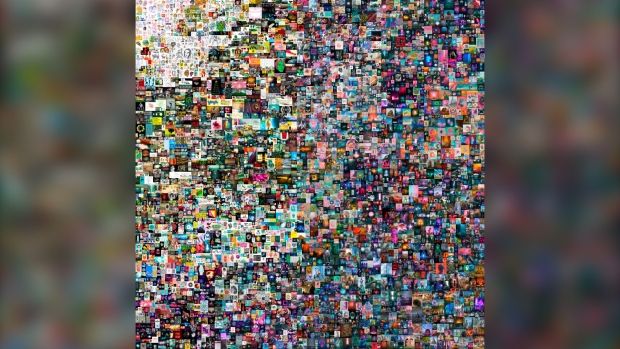 LONDON - Christie's says it has auctioned off a digital collage by an artist named Beeple for nearly $70 million, in an unprecedented sale of a digital artwork that fetched more money than physical works by many better known artists.

The piece, titled “Everydays: The First 5,000 Days,” sold for $69.4 million in an online auction, “positioning him among the top three most valuable living artists,” Christie's said via Twitter on Thursday.

Christie's said it also marks the first time a major auction house has offered a digital-only artwork with a non-fungible token as a guarantee of its authenticity, as well as the first time cryptocurrency has been used to pay for an artwork at auction.

Beeple, whose real name is Mike Winkelmann, responded to the sale result with an expletive on Twitter.

“Artists have been using hardware and software to create artwork and distribute it on the internet for the last 20+ years but there was never a real way to truly own and collect it,” Beeple said in a statement released by Christie's. “With NFT's that has now changed. I believe we are witnessing the beginning of the next chapter in art history, digital art.”

Christie's did not identify the buyer of the artwork, which consists of 5,000 individual digital pictures stitched together that Beeple created - one each day - since May 2007.

Non-fungible tokens, known as NFTs, are electronic identifiers confirming a digital collectible is real by recording the details on a digital ledger known as a blockchain. The tokens have swept the online collecting world recently, an offshoot of the boom in cryptocurrencies. They're used to prove that an item is one of a kind and are aimed at solving a problem central to digital collectibles: how to claim ownership of something that can be easily and endlessly duplicated.

Some 22 million people tuned in on the Christie's website for the final moments of bidding, with bidders from 11 countries taking part.

Others have also joined the craze for NFTs. Twitter CEO Jack Dorsey put his first ever tweet - “just setting up my twttr” - up for online auction as an NFT, with bids reaching as high as $2.5 million, and he promised to donate the proceeds to charity. Rock band Kings of Leon is offering a version of their latest album with the tokens that come with extras. A blockchain company bought a piece of work by British artist Banksy, burned it and then put a digital version on sale through a non-fungible token. The National Basketball Association is teaming up in a venture to sell virtual sports cards backed by the tokens. And the Associated Press is offering NFT digital artwork - a depiction of the U.S. presidential election's electoral college map as viewed from space.