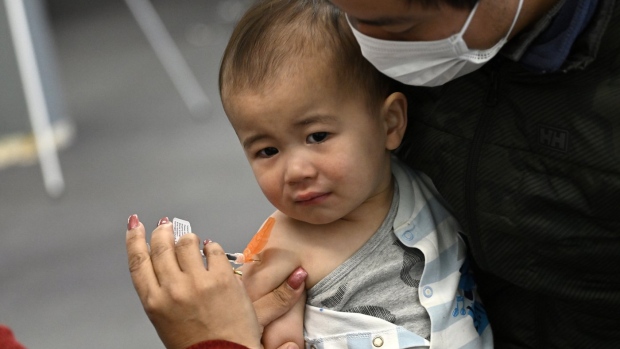 Taika Loo, 16 months, receives a COVID-19 vaccine at a clinic in Ottawa, on Wednesday, Nov. 23, 2022. Preventable diseases like measles could spread quickly in Canada like elsewhere in the world due to a drop in routine vaccinations during the pandemic, say pediatricians who are urging parents to ensure their kids are fully immunized. THE CANADIAN PRESS/Justin Tang

Preventable diseases like measles could follow trends seen elsewhere in the world and spread quickly in Canada due to a drop in routine vaccinations during the COVID-19 pandemic, say pediatricians who are urging parents to ensure their kids are fully immunized.

Provinces and territories log data on vaccinations provided in the community against infectious diseases like measles, diphtheria, polio and whooping cough, as well as vaccines against other illnesses administered in school immunization clinics.

Although much current data doesn't cover years beyond 2019, provinces with more recent figures are already seeing a dramatic decline in routine vaccinations.

Pediatricians are concerned about possible outbreaks of preventable diseases if too many children were underimmunized or not vaccinated at all while public health clinics focused on COVID-19 vaccines. Widespread school closures and vaccine disinformation that swayed some parents against immunization efforts complicated matters still further.

For human papillomavirus, or HPV, which can cause cancer, the vaccination numbers were even lower, plunging to 0.8 per cent last year, compared with 58 per cent in 2019. For the meningococcal vaccine, which helps protect against four types of the bacteria that cause a rare disease, vaccinations fell to about 17 per cent from 80 per cent over the same time. Risks of the potentially deadly illness include meningitis, an infection of the lining of the brain and spinal cord.

"The large decline in coverage in 2019-20 and 2020-21 illustrates the impact of the COVID-19 pandemic, as there was limited capacity to deliver school-based immunization programs," Public Health Ontario said in a statement.

It said data for uptake of vaccines aimed at protecting younger kids against measles, for example, is not available beyond 2019, and a report on later numbers is expected to be released next spring.

Dr. Monika Naus, medical director of Immunization Programs and Vaccine Preventable Diseases Service at the BC Centre for Disease Control, said in-school vaccines, starting in Grade 6, were delayed, but work is underway to return to pre-pandemic levels.

Younger children missed appointments at doctors' offices while physicians were seeing patients virtually and public health clinics, which mostly administer routine vaccines for kids outside of the Lower Mainland region of the province, were busy with COVID-19 shots, Naus said.

Dr. Sam Wong, director of medical affairs for the Canadian Paediatric Society, said disinformation and vaccine hesitancy during the pandemic, "combined with the failure of the public health system" to provide routine vaccines, mean certain populations could be left vulnerable to highly contagious diseases like measles, which spreads through coughing and sneezing.

"You could walk into a room an hour after someone's been in there and potentially get infected," he said.

"We're worried, as a group of health-care providers, that if you have lower rates of vaccinations that you're more likely to have localized outbreaks of vaccine-preventable illnesses such as measles or mumps and chickenpox," Wong said.

Wong said it's important for doctors and parents to discuss the importance of routine vaccinations that have been proven effective for decades, adding some people believe young kids' immune systems are not ready so they'd rather wait until they're older.

"But that's why you want to give the vaccine, because their immune system is not able to fight off infections," he said.

"Some parents don't want to even have discussions with me about it. But if there is an opening, I'm happy to talk about it," said Wong, who works in Yellowknife, Edmonton and Victoria.

The Public Health Agency of Canada said Canadian studies have found immunization coverage declined during the pandemic for the measles, mumps and rubella vaccine.

Quebec saw a 39 per cent drop in April 2020 compared with 2019, the agency said, with the greatest impact seen in children aged 18 months.

In Alberta, the agency said vaccination for those diseases declined by 10 per cent in April 2020 compared with the same month a year earlier. Coverage for Ontario children under two decreased by 1.7 per cent, it added.

"The Public Health Agency of Canada continues to work with provinces and territories on an ongoing basis to understand the impact of the pandemic on routine immunization coverage across Canada, and to improve the availability of high-quality data to inform immunization programs," it said in a statement.

It is currently in discussions with all jurisdictions on ways to monitor coverage of vaccines, similar to a surveillance system used for COVID-19 vaccines, the agency said.

Nova Scotia Health said its last report on childhood vaccines was completed three years ago, and numbers have fallen during the pandemic.

"Anecdotally, we know there was a drop in childhood vaccination, but we do not have the specific numbers available at this time," it said in a statement.

However, the school immunization program is aiming to help students catch up on vaccines that were missed early in the pandemic, mostly through doctors' offices, it said, adding that getting an appointment was a challenge for some families.

Last week, the World Health Organization and the United States Centers for Disease Control and Prevention released a statement saying a record high of nearly 40 million children missed first and second doses of the measles vaccine in 2021 due to disruptions in immunization programs since the start of the pandemic.

The two groups said there were an estimated nine million measles cases and 128,000 related deaths worldwide in 2021, and 22 countries experienced large outbreaks.

Dr. Noni MacDonald, a professor of pediatrics and infectious diseases at Dalhousie University in Halifax, said a national registry that could quickly tell doctors which children have not been vaccinated is essential in Canada.

"I feel like I'm banging my head against a brick wall," she said of her efforts to call for that change.

"How can we do proper health-care planning when we don't have the data?"

Canada is an "outlier" that lags behind most European countries on the measles vaccine, she said, adding a coverage rate of 95 per cent is needed to create so-called herd immunity against the highly infectious disease.

Canada recently had 84 per cent uptake of the second dose of the measles vaccine. MacDonald said Australia, in comparison, had 94 per cent based on the most recent data from the WHO. She used the two countries as an example because they had a similar number of births — 368,000 in Canada, and 300,000 in Australia in 2021.

"We are just not in the same league, and we should be embarrassed."

This report by The Canadian Press was first published Nov. 27, 2022.

This story was produced with financial assistance from the Canadian Medical Association.