DOHA, Qatar (AP) — The World Cup in Qatar has become a political lightning rod, so it comes as no surprise that soccer fans' sartorial style has sparked controversy.

Forget your classic soccer jerseys - the streets of Doha have been transformed into a chaotic runway show in terms of fashion.

Visitors from around the world are wearing revamped versions of traditional Gulf Arab headdresses and thobes. Western women have tried out hijabs. England fans have donned crusader costumes. The politically minded have made statements with rainbow accessories in Qatar, which criminalizes homosexuality.

Fan fashion has drawn everything from amusement to outrage from locals in the tiny Muslim emirate that has seen nothing remotely like the spectacle of the World Cup before.

The most popular style among foreign fans at this World Cup is the ghutra, the traditional head scarf worn by men across the Arabian Peninsula.

If photographed at a Halloween party back home in Cape Town, South Africa, 60-year-old Gavin Coetzee admits his wardrobe choice might seem ill-conceived — even cringe-worthy. He asked a tailor to stitch together four African flags into a ghutra and stereotypical Arabian thobe, the long flowing tunic that Qatari men wear in crisp white.

“I wouldn’t wear this in a Western country," he said, referring to heightened cultural sensitivity there. But to his surprise, his costume has drawn elation and praise from locals in Qatar.

"It's been amazing. Everyone wants to take our photo, ask us where we're from, they're interested in why we put this outfit together," he said, alongside two friends wearing the same get-up.

The narrow alleys of Doha's central Souq Waqif teem with vendors hawking ghutras in various national colors, from Brazil's bright blue, green and yellow to Mexico's tricolor red, white and green. The sellers iron and fold them to create a widow’s peak effect, carefully fitting the cloth to fans' heads in the so-called cobra style of worn by Qataris.

“I wanted to immerse in the culture. It's fun to get to try new things,” said 41-year-old Ricardo Palacios from Venezuela, wearing a red-and-white checkered headdress. “Locals are in shock ... that someone wearing a Spanish shirt is wearing this."

Qataris' only complaint so far, Palacios added, is that “I don't know how to do it right." He said locals stop him in the street, restyling his headgear so it looks the way it should. Similar videos have been widely shared on social media.

Qatari citizen Naji al-Naimi, a board member of Majlis al-Dama, a lively hub of coffee and backgammon in Doha's outdoor marketplace, said the scores of international fans wearing his national dress don't bother him in the least. Instead, he finds the trend endearing. He compared it to citizens of the Arabian Peninsula wearing jeans or suits when traveling in Europe.

“We're always trying to adjust and appeal to the customs and traditions of the host country,” he said. 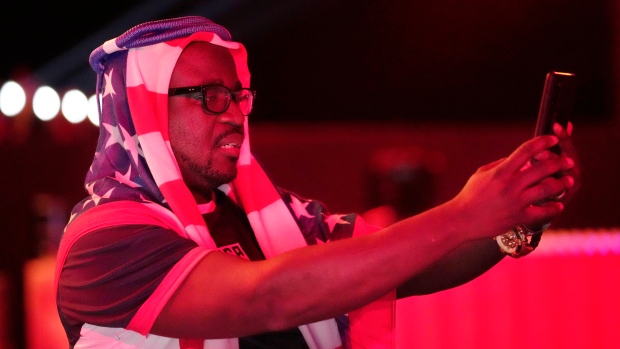 Among non-Muslim visitors, even the hijab, the traditional Muslim headscarf showing piety to Allah, has emerged as trendy World Cup wear. Online videos show foreign women on the streets of Doha donning colorful headscarves, exclaiming how secure and cute they feel.

Qatar's local population hasn't taken kindly to other outfits, particularly England fans' caped crusader costumes. The outfits, featuring a suit of chainmail armor, plastic helmet and shield emblazoned with an upright cross, are a nod to the Christian conquests of the Holy Land from the 11th to 13th centuries that pitted European invaders against Muslims.

Footage circulating on Twitter showed Qatari security turning away fans dressed as crusaders before the England-Iran match in the tournament's group stage. Others reported they were asked to surrender their costumes before England played the United States a few days later.

“What is so painful is to see some visitors in our country praising the glories of Crusader Europe, which disgraced the honor of all Muslims,” said Ashraf al-Khadeer, a 33-year-old Qatari citizen in Doha.

But the biggest flashpoint at the tournament so far has been rainbow clothing and other multicolored accessories as Qatar's criminalization of homosexuality triggered a storm of criticism. After FIFA threatened European teams wearing “One Love” armbands with in-game discipline, some fans have taken it upon themselves to show solidarity with the LGBTQ community.

Days after fans complained they were blocked from stadiums because of rainbow attire, FIFA offered assurances that Qatari security would allow the items into matches. The rule has been unevenly enforced. To avoid the hassle, a French advertising agency has promoted World Cup armbands printed with black-and-white Pantone cards that identify rainbow colors with numbers. Others have gone to extremes, such as the protester who stormed the field with a rainbow flag during the match between Portugal and Uruguay before being tackled by a steward.

More broadly, the question of what to wear at the World Cup in Qatar, a conservative Muslim emirate, has sparked anxiety for female fans long before the tournament kicked off.

So when Ivana Knöll, an Instagram model and former Croatian beauty queen, showed up to stadiums this week wearing a minidress that exposed much of her chest, some feared an international incident. But Knöll said she felt comfortable and that locals assured her she could wear whatever she wanted.

On Friday, Knöll posted a photo on Instagram of Qatari men snapping photos as she strutted down stadium bleachers in tight leggings and a bra.

“Thank you so much for your support!” she wrote to celebrate her 1 million followers, drawing comments in Qatar reflecting a mix of admiration, outrage and puzzlement.

Croatia and Canada fans cheer ahead of the World Cup group F soccer match between Croatia and Canada, at the Khalifa International Stadium in Doha, Qatar, Sunday, Nov. 27, 2022. At a World Cup that has become a political lightning rod, it comes as no surprise that soccer fans’ sartorial style has sparked controversy. At the first World Cup in the Middle East, fans from around the world have refashioned traditional Gulf Arab headdresses and thobes. (AP Photo/Darko Vojinovic, File)

An England fan wearing a rainbow shirt sits in the stands prior to the start of the World Cup group B soccer match between England and Iran at the Khalifa International Stadium in in Doha, Qatar, Monday, Nov. 21, 2022. (AP Photo/Abbie Parr)

An American fan, wearing a U.S flag as a traditional Gulf head scarf, takes a selfie ahead the World Cup group B soccer match between England and the United States, at a fan zone of Dubai Harbor, United Arab Emirates Saturday, Nov. 26, 2022. (AP Photo/Hussein Malla)