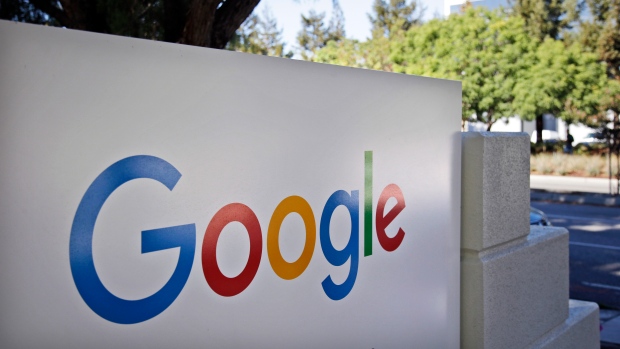 FILE - In this Oct. 20, 2015 file photo, signage sits outside Google headquarters in Mountain View, Calif. Google is postponing a return to the office for most workers until mid-October and rolling out a policy that will eventually require everyone to be vaccinated once its sprawling campuses are fully reopened in an attempt to fight the spreading Delta variant. (AP Photo/Marcio Jose Sanchez, File)

SAN RAMON, Calif. (AP) - Google is postponing a return to the office for most workers until mid-October and rolling out a policy that will eventually require everyone to be vaccinated once its sprawling campuses are fully reopened.

The more highly contagious delta variant of the coronavirus is driving a dramatic spike in COVID-19 cases and hospitalizations. Google's Wednesday announcement was shortly followed by Facebook, which also said it will make vaccines mandatory for U.S. employees who work in offices. Exceptions will be made for medical and other reasons.

In an email sent to Google's more than 130,000 employees worldwide, CEO Sundar Pichai said the company is now aiming to have most of its workforce back to its offices beginning Oct. 18 instead of its previous target date of Sept. 1.

The decision also affects tens of thousands of contractors who Google intends to continue to pay while access to its campuses remains limited.

“This extension will allow us time to ramp back into work while providing flexibility for those who need it,” Pichai wrote.

And Pichai disclosed that once offices are fully reopened, everyone working there will have to be vaccinated. The requirement will be first imposed at Google's Mountain View, California, headquarters and other U.S. offices, before being extended to the more than 40 other countries where Google operates.

“This is the stuff that needs to be done, because otherwise we are endangering workers and their families,” said Dr. Leana Wen, a public health professor at George Washington University and a former health commissioner for the city of Baltimore. “It is not fair to parents to be expected to come back to work and sit shoulder-to-shoulder with unvaccinated people who could be carrying a potentially deadly virus.”

Because children under the age of 12 aren't currently eligible to be vaccinated, parents can bring the virus home to them from the office if they are around unvaccinated colleagues, Wen said.

Various government agencies already have announced demands for all their employees to be vaccinated, but the corporate world so far has been taking a more measured approach, even though most lawyers believe the mandates are legal.

Less than 10% of employers have said they intend to require all employees to be vaccinated, based on periodic surveys by the research firm Gartner.

While other major technology companies may follow suit now that Google and Facebook have taken stands on vaccines, employers in other industries still may be reluctant, predicted Brian Kropp, chief of research for Gartner's human resources practice.

“Google is seen as being such a different kind of company that I think it's going to take one or two more big employers to do something similar in terms of becoming a game changer,” Kropp said.

Google's vaccine mandate will be adjusted to adhere to the laws and regulations of each location, Pichai wrote, and exceptions will be made for medical and other “protected” reasons.

“Getting vaccinated is one of the most important ways to keep ourselves and our communities healthy in the months ahead,” Pichai explained.

Google's decision to require employees working in the office to be vaccinated comes on the heels of similar moves affecting hundreds of thousands government workers in California and New York as part of stepped-up measures to fight the delta variant. President Joe Biden also is considering mandating all federal government workers be vaccinated.

The rapid rise in cases during the past month has prompted more public health officials to urge stricter measures to help overcome vaccine skepticism and misinformation.

The vaccine requirement rolling out in California next month covers more than 240,000 government employees. The city and county of San Francisco is also requiring its roughly 35,000 workers to be vaccinated or risk disciplinary action after the Food and Drug Administration approves one of the vaccines now being distributed under an emergency order.

It's unclear how many of Google's workers still haven't been vaccinated. In his email, Pichai described the vaccination rate at the company as high.

Google's decision to extend its remote-work follows a similar move by another technology powerhouse, Apple, which recently moved its return-to-office plans from September to October, too.

The delays by Apple and Google could influence other major employers to take similar precautions, given that the technology industry has been at the forefront of the shift to remote work triggered by the spread of the novel coronavirus.

Even before the World Health Organization declared a pandemic in March 2020, Google, Apple and many other prominent tech firms had been telling their employees to work from home. This marks the third time Google has pushed back the date for fully reopening its offices.

Google's vaccine requirement also could embolden other employers to issue similar mandates to guard against outbreaks and minimize the need to wear masks in the office.

While most companies are planning to bring back their workers at least a few days a week, others in the tech industry have decided to let employees do their jobs from remote locations permanently.