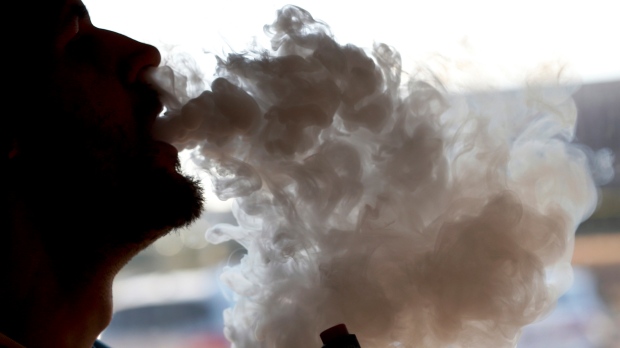 TORONTO - A national health advocacy group says higher taxes on vaping products in Ontario would combat rising use among teenagers and create a revenue stream to tackle the costs of addiction.

The Heart and Stroke Foundation of Canada has asked Premier Doug Ford's government to include a tax hike between 20 and 30 per cent in its spring budget.

The group's senior manager of public affairs said a higher cost would make the addictive products unaffordable for teenagers while still allowing adults to use them to quit smoking.

Liz Scanlon said while research into vaping is still in early stages, decades of tobacco control studies have shown that taxation is a key tool to keep the products out of the hands of teens.

“When it comes to cigarette taxes, the research is there to demonstrate that kids are ... more likely to cut back or quit when prices go up,” she said.

Ontario's health minister has said she is growing increasingly concerned about the jump in youth vaping rates and has promised to announce further government action before the end of the month.

Christine Elliott said the government is considering a ban on flavoured vapes, as well as examining the nicotine content in the products and where they should be sold.

On Jan. 1, a provincial ban on in-store promotion of vapour products in gas bars and convenience stores came into effect.

When asked about the foundation's proposal on Wednesday, a spokeswoman for the Ministry of Finance said the government “does not speculate about taxation policy”.

Scanlon said the group is aware of the government's fiscal challenges - and its pledge to eliminate Ontario's $7.4-billion deficit - and that the tax could also create a stream of revenue to pay for vaping's impacts on the health-care system.

Vaping proponents defend the products as a safer alternative to smoking that can help people quit the habit. Some have also expressed concerns that hiking taxes could create a black market for the products.

“We certainly can't make these products more expensive than cigarettes,” Scanlon said. “That's not our aim from a policy perspective.”

NDP health critic France Gelinas said she supports Heart and Stroke's call for increased taxes on vaping products, which echoes a measure she included in a private member's bill on vaping she introduced last fall.

The bill, if passed, would also prohibit the promotion of vaping products, regulate flavours, set a maximum amount of nicotine per vape, restrict sales to specialty shops, and require Ontario Health to prepare an annual report on vaping usage and health effects.

Gelinas said the Ford government has been slow to react, and contributed to, the increasing problem when it paused regulations introduced by the previous Liberal government that were set to ban the promotion of vaping products in convenience stores over a year ago.

“You have tens of thousands of teens addicted to nicotine through vaping,” she said. “They chose to look the other way and let this disaster happen.”