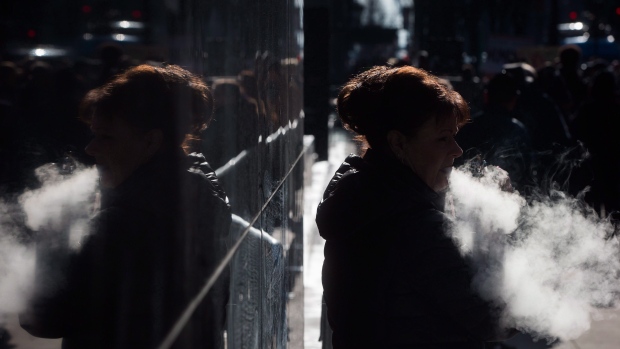 A woman exhales while smoking a vaporizer outside an office tower in downtown Vancouver, Tuesday, Feb. 28, 2017. THE CANADIAN PRESS/Darryl Dyck

A newly published article says an Ontario teenager's brush with death due to a lung disease highlights exactly how little the medical community knows about the effects of vaping.

The article, published Thursday in the Canadian Medical Association Journal, was written by six doctors who treated the 17-year-old boy during a 47-day hospital stay.

They say the boy went from being in perfect health to being on life support after just five months of regularly using e-cigarettes.

The article outlines his hospitalization in early 2019, during which he spent time on life support and narrowly averted a double-lung transplant.

The doctors say his respiratory condition differed from the kinds typically seen in the growing number of confirmed vaping-related cases documented in the United States.

They say the teen's condition resembled the sort of damage usually seen in factory workers forced to breathe in toxic chemicals often seen in products such as microwave popcorn, which are safe to ingest but not to inhale.