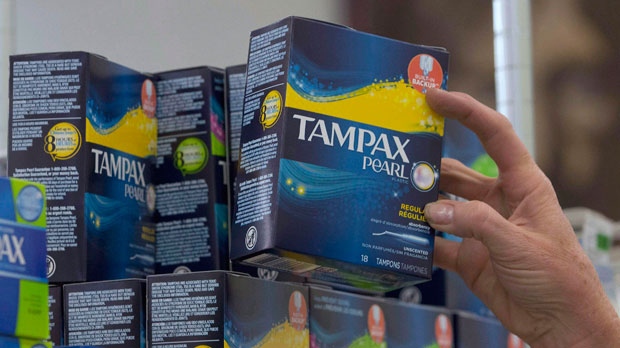 In this June 22, 2016 file photo, a woman restocks tampons at Compton's Market, in Sacramento, Calif. A Halifax university has become the first in the province to offer its students free menstrual products, part of a national movement that has been gaining steam among student leaders. THE CANADIAN PRESS/AP/Rich Pedroncelli

The government proposes to put menstrual products, such as tampons, in the same group of supplies employers must provide free, which includes toilet paper, soap, warm water, and a way to dry your hands.

The government isn't sure yet exactly how the program will work: The notice made public Friday afternoon launches a 60-day consultation to figure out what products are needed and how to take into account the cost the move might have on businesses.

There are also questions about how to provide products in trains and aircraft, for instance, where there may space limits or where workers share washrooms with the public.

The proposed rules would apply to the 1.2 million workers in the federal labour force, a group that includes banks, telecommunications and transport workers and makes up about six per cent of the nation's workers.

Of those workers, the rules would affect about 40 per cent of them, the government notice says -- or about 480,000 workers.

The cost of menstrual products varies significantly across the country. A 40-pack of tampons in Northern and remote communities can cost upwards of $15.

A 2018 survey from Plan Canada International, cited in the government's notice, suggested that one-third of women under age 25 found it difficult to afford menstrual products and further suggested that almost three-quarters had missed work for reasons connected to menstruation -- because of, for instance, not having the supplies they needed when a period started unexpectedly.

"Having open and honest conversations around menstruation, and providing women and employees with the products they need, is part of our plan to ensure equality for women and support safe and healthy work environments," Labour Minister Patty Hajdu said in a statement.

The federal government removed the Goods and Services Tax from menstrual products in 2015, and other jurisdictions in Canada and the United States have followed suit.

At the same time, there has been a growing movement to provide free feminine hygiene products on campuses and in schools.

Starting in September, students in British Columbia's New Westminster School Board will have access to free tampons and pads in their washrooms.

Earlier this year, Toronto city councillors decided to spend more than $222,000 to buy menstrual products and dispensers for city-run homeless shelters, drop-in and respite centres, as well as some neighbourhood community centres.