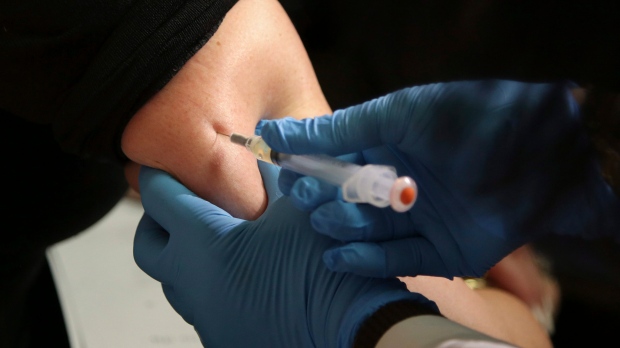 FILE - In this March 27, 2019, file photo, a woman receives a measles, mumps and rubella vaccine at the Rockland County Health Department in Pomona, N.Y. Measles cases in the U.S. this year have climbed to the highest level in 25 years, according to preliminary figures, a resurgence attributed largely to misinformation about vaccines. (AP Photo/Seth Wenig, File)

The findings debunk notions that most babies are protected for much of their first year by maternal antibodies passed on through pregnancy.

In fact, Toronto researchers from the Hospital for Sick Children and Public Health Ontario say the vast majority of 196 infants they studied were susceptible by three months of age.

And none of the infants were immune at six months.

Babies typically don't receive the measles vaccine until they are 12 months old. That results in a wide susceptibility gap that the study's senior author called “quite alarming.”

Shelly Bolotin, a scientist at Public Health Ontario, said the findings underscore the need for everyone to keep their immunization up-to-date to protect the most vulnerable members of the population.

“This is really troubling because measles is a serious disease, and it can be quite serious in infants,” said Bolotin, also an assistant professor at the Dalla Lana School of Public Health and the Department of laboratory medicine and pathobiology at the University of Toronto.

“It can be absolutely devastating and we need to make sure that we are protecting our most vulnerable members of our population - infants.”

The study was published online Thursday and appears in the December edition of the American Academy of Pediatrics journal, Pediatrics.

Bolotin said researchers already knew infant immunity declines in the first six months of life, but they did not expect such a rapid drop.

“We were surprised to see that waning or that lack of protection start earlier,” said Bolotin, who collaborated with lead author Dr. Michelle Science, infectious disease specialist at Sick Kids and also an infection control physician at Public Health Ontario.

She said the assumption that babies are protected longer is based on studies conducted in places where measles remains prevalent. In those regions, mothers have more robust antibody levels to pass on to their child because their immunity comes through natural infection and is repeatedly boosted by continual exposure to measles.

Bolotin said the Toronto study is unique in measuring antibodies at each month of an infant's life from birth to 12 months. Previous research has focused on measuring immunity levels among babies at birth or those older than six months.

A companion paper written by two other experts that also appears in Pediatrics raises the question of whether it's time to consider changing the vaccine schedule. It concludes there's no reason to vaccinate earlier, despite ongoing outbreaks in the United States.

Bolotin acknowledged this is a challenging question for policy makers who must weigh the risk of infection against the best time to vaccinate children, whose immunity system is still maturing.

Infants between six and 11 months who travel to regions where measles is endemic are encouraged to receive an early dose of the vaccine in addition to their regular 12-month dose, but otherwise, all provinces in Canada recommend the measles, mumps, and rubella vaccine (MMR) at 12 months of age.

The schedule for a second dose of the vaccine varies across the country.

The Pediatrics commentary suggested early vaccination may actually hinder the efficacy of a later dose, resulting in lower levels of the antibody compared with children who first get the vaccine at 12 months.

“Early vaccination may also alter response after re-vaccination, leading to lower levels of the antibody compared with children who are vaccinated for the first time during the second year of life,” they state, citing one study that looked at immunity in children aged five to 10, and another published earlier this year that looked at short- and long-term impacts on children in the Netherlands.

As of late last week, Bolotin said Canada has seen 112 cases of measles this year, the vast majority of them imported or import-related.

Measles can cause severe complications including pneumonia, encephalitis and death.