Medical marijuana users get OK from province to vaporize anywhere

TORONTO -- Medical marijuana users in Ontario are now legally able to use vaporizers just about anywhere in the province.

The Liberal government quietly exempted them this week from a law that bans the use of e-cigarettes anywhere regular cigarettes are prohibited. It means medical marijuana users can vaporize in restaurants, at work or on playgrounds.

Associate Health Minister Dipika Damerla said under the exemption for medical marijuana users, employers or restaurant owners could still ban them from smoking on the premises.

"If it's bothering somebody, find another place to go and smoke," she said Wednesday.

"Somebody who really needs it for medical reasons may need to be able to smoke it or vape it. On the other hand, we are very sensitive to people around them. It really is about balancing those rights."

The exemption is about letting people who are very sick or in a lot of pain to take their prescribed medication when they need to, Damerla said.

Jonathan Zaid, the founder of Canadians for Fair Access to Medical Marijuana, said the new regulations don't change much since medical marijuana users could already smoke "pretty much" anywhere before the e-cigarette law was passed in May.

"Public places like parks or sidewalks are for sure allowed now in the regulations," he said.

"So it doesn't really mean anything new because it has always been allowed. There haven't been regulations pertaining to vaporizers in the past, but what it does mean is the provincial government is taking a step forward and actually recognizing medical marijuana as a legitimate medicine."

But Zaid highly doubts the change in regulations will mean medical marijuana users flooding playgrounds and restaurants to vaporize.

"There's one thing to have a right and there's another thing to abuse it," said Zaid, who uses medical marijuana to treat chronic headaches.

"Everyone that I know, including myself, who uses medical cannabis is discreet about it. They just want to use it as their medicine to feel better, to live a better quality of life and they don't want to be harassed about it, so that also means they're not typically likely to do it in a very public space."

Progressive Conservative Leader Patrick Brown said he didn't want to "make a lot of political hay" over the exemption, but he urged the Liberal government to make sure the new provincial rules are in line with what municipalities have established.

When asked what she would do if someone was smoking marijuana next to her at a restaurant, she laughed and said, "I'll probably eat more." 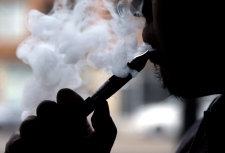