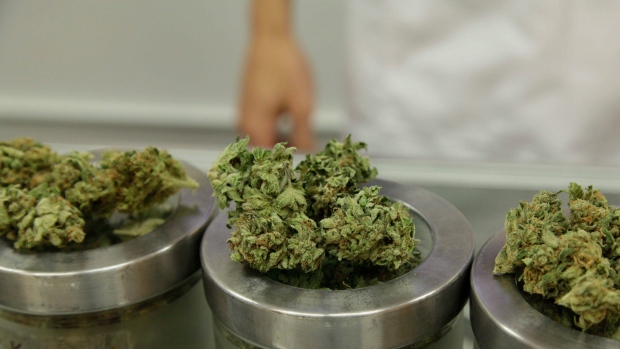 Medical marijuana is on display in Portland, Ore., on June 26, 2015. (The Canadian Press/AP/Gosia Wozniacka)

TORONTO -- A pharmacists' group that initially nixed the idea of dispensing medical cannabis has changed its stance, saying that pharmacists should play a "front-line role" in providing access to the drug.

The Canadian Pharmacists Association says it has updated its position because of its growing concern about what it calls a "lack of clinical oversight" in the use of medical marijuana.

The group said in a release issued Thursday that pharmacists are "medication experts" and therefore could help identify potential problems such as drug interactions, contraindications and potentially addictive behaviour.

When Health Canada was developing its medical marijuana regulations, which were implemented in 2013, the federal agency had proposed that cannabis be distributed through pharmacies.

At the time, the pharmacists' association said it was concerned about dispensing the product because of insufficient evidence about its safety and effectiveness.

The group was also concerned that provincial and territorial governments would not agree to such a system and was worried about safety risks such as robberies.

"The medical marijuana landscape has changed significantly since we first took a position on this issue," the association said in an email Thursday.

"For instance, the number of medical marijuana users is growing, with minimal involvement and oversight by health-care professionals."

However, licensed cannabis producers say they don't think that pharmacies should be the only way for patients to access medical marijuana.

"I think the pharmacy model is a good option for patients, but in addition to the existing mail order and customer service system we have today," said Greg Engel, the CEO of B.C.-based Tilray.

The Canadian Medical Cannabis Industry Association says that if pharmacies become the sole option, replacing the current mail-order system, that would leave patients at a disadvantage.

The association, which represents licensed cannabis producers, says it would be impossible for pharmacies to stock the hundreds of strains of marijuana that patients are able to access today.

Colette Rivet, executive director of the CMCIA, says it's important for patients to have a wide array of choices when it comes to strains.

"You have to try some different ones sometimes -- with different THC or CBD content -- to make sure it addresses the symptoms of your particular condition," Rivet said.

THC and CBD are abbreviations for tetrahydrocannabinol and cannabidiol, two of the active components of medical marijuana.

Rivet says that moving distribution over to pharmacies and getting rid of the mail-order system would also increase costs for consumers -- which are already high considering that in most instances, cannabis is not covered by health insurance plans.

"Pharmacies have large overheads, and they add a dispensing fee," says Rivet.