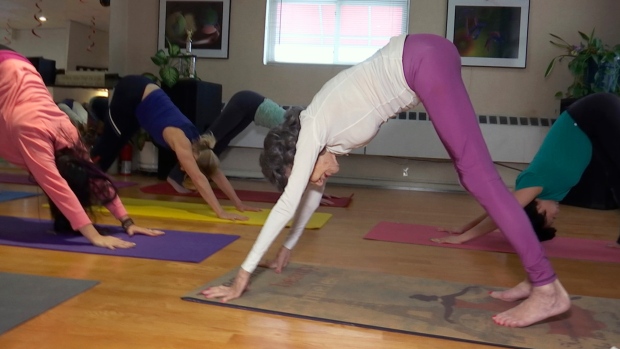 In this April 5, 2019, image made from a video, 100-year-old Tao Porchon-Lynch, right foreground, teaches a yoga class in Hartsdale, N.Y. (AP Photo/Ted Shaffrey)

HARTSDALE, N.Y. - A 100-year-old yoga instructor has no plans to stop practicing and teaching.

Tao Porchon-Lynch (TAH'-oh) first encountered the ancient practice of yoga at age 7 on a beach in India, where she was born. She recalls being transfixed by a group of boys doing yoga poses. When her aunt told her the movements were “not ladylike,” she responded, “If boys can do it, I can do it.”

She now works in Hartsdale, a northern suburb of New York City.

Porchon-Lynch says her mission is to teach people how to breathe right.

Despite four hip replacements, she also does ballroom dancing at a Fred Astaire Dance Studio. She has been on the television show “America's Got Talent.”

In this April 5, 2019, image made from a video, 100-year-old Tao Porchon-Lynch teaches a yoga class in Hartsdale, N.Y. (AP Photo/Ted Shaffrey)