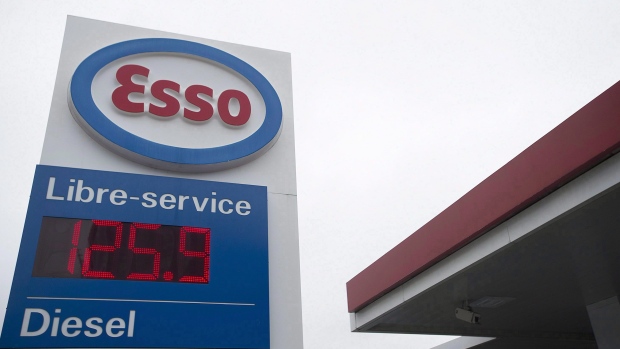 Loblaw Companies Ltd. and Imperial Oil Ltd. have signed a deal that will allow PC Optimum members to earn points at more than 1,800 Esso gas stations starting this summer. Gas price is shown at an Esso filling station in Montreal, Wednesday, April 12, 2017. THE CANADIAN PRESS/Graham Hughes

MONTREAL -- PC Optimum points will replace Aeroplan miles as the loyalty program of choice at Esso stations across the country effective June 1, as Imperial Oil Ltd. shifts its relationship to Loblaw Companies Ltd.

Aimia Inc.-operated Aeroplan notified members of the change to its 14-year partnership in an email on Tuesday.

It noted that up to 1.5 miles for every dollar spent will continue to be earned when using Aeroplan-affiliated credit cards for purchases at any retailer, including Esso.

Aimia said it is working on a promotion to earn more miles with existing partners and developing a strategy for how the program will change once the long-term partnership with Air Canada ends in 2020.

"The number of miles you earn on any particular transaction is pretty low so it's really not financially a big deal," she said in an interview.

Drew McReynolds of RBC Dominion Securities said Esso accounts for an undisclosed fraction of the 10 to 12 per cent gross billings from non-financial and non-Air Canada partners.

However, the minimal financial impact doesn't convey the overall effect on Aeroplan as it prepares for the departure of Air Canada.

Loblaw Imperial Oil announced Tuesday they have signed a deal that will allow PC Optimum members to earn points at more than 1,800 Esso gas stations starting this summer.

The company said members will earn 10 points per litre on fuel as well as 10 points per dollar on eligible convenience store purchases and car wash services at Esso stations.

The company faced some issues during the merger, with some members complaining online about troubles with the new app and points conversions.

On the Toronto Stock Exchange, Aimia's shares gained nearly four per cent at $1.60 in morning trading.