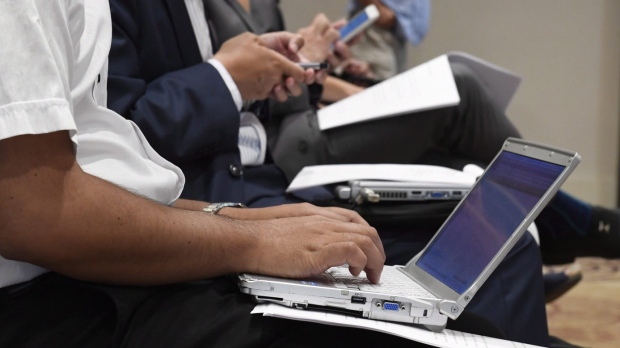 Journalists work in Toronto on Monday, July 18, 2016. A new report finds that members of Canada's news industry are suffering "alarming" levels of work-related stress and trauma. THE CANADIAN PRESS/Frank Gunn

Members of Canada's news industry are suffering "alarming" levels of work-related stress and trauma, a new report suggests, and researchers are calling for better supports to help journalists cope with covering COVID-19 and other crises.

The findings, based on 1,251 voluntary responses to an online survey conducted between Nov. 1 and Dec. 18, 2021, showed that media workers have dealt with high rates of mental health conditions over the past four years.

The lead researchers on the project said the report underscores how the upheaval of a pandemic-accelerated news cycle has exacerbated the pressures of working in a profession steeped in competition and tragedy.

"Our findings confirm our worst fears and suspicions about the industry," Carleton University journalism professor Matthew Pearson told a news conference on Parliament Hill on Wednesday.

"The onus is now on all of us — from the front lines, to newsroom leaders, executives and journalism educators — to grasp the gravity of this situation and meaningfully address it to reduce the harms Canadian media workers are suffering on the job."

The harms of harassment were particularly pronounced among women, transgender and nonbinary journalists, the report said. Black, Arab, South Asian and Filipino journalists reported higher rates of online harassment. Workers who were more identifiable as members of the media, such as video journalists and photographers, were more likely to be targeted in the field.

The survey also indicated that exposure to trauma is taking a toll on media workers, with 80 per cent of participants saying they've experienced burnout as a result of reporting on stories about death, injury and suffering. Some participants also reported experiencing other emotional and psychological side-effects, such as suicidal thoughts or "numbing out" by using alcohol or other substances.

The "suck it up" culture of many newsrooms deters journalists from seeking help to manage their struggles due to fears about how speaking up could impact their careers, Seglins said, and many employers lack the expertise, resources and benefits needed to support journalists' well-being.

He urged news organizations to collaborate with workers to identify and redress these gaps to ensure the proper functioning of the Fourth Estate.

"All of this is having a profound impact on the health of people who work in the news industry — the watchdogs of our democracy," Seglins said.

— By Adina Bresge in Toronto