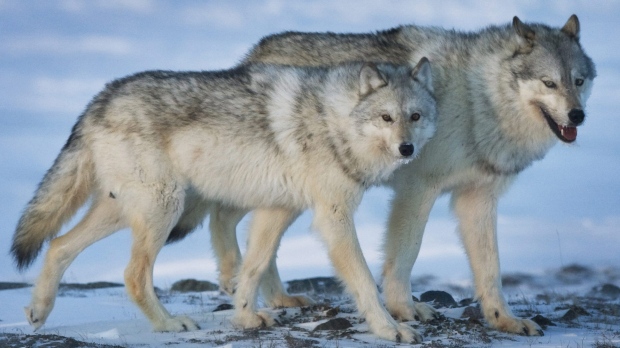 A female wolf, left, and male wolf roam the tundra near The Meadowbank Gold Mine located in the Nunavut Territory of Canada on Wednesday, March 25, 2009. THE CANADIAN PRESS/Nathan Denette

MONTREAL - A Quebec government plan to kill wolves that get too close to an endangered woodland caribou herd is raising concern among environmentalists, who accuse the government of sidestepping the true problem of habitat loss.

The plan by the Department of Forest, Wildlife and Parks involves placing tracking collars on both the caribou and members of local wolf packs to monitor distances between them.

If a wolf were to threaten the herd, trained shooters in helicopters could be sent in to kill the wolf in a “targeted intervention,” according to Francis Forcier, who is the general manager for strategic mandates at the department.

Forcier said the measures could be necessary in order to reverse the decline of the Charlevoix herd north of Quebec City, whose numbers have fallen to an estimated 31 animals from 59 two years ago. He stressed that the plan remains hypothetical and is intended as a stopgap while the province addresses the greater problem of habitat restoration.

“What we've started to do, given this drastic fall of nearly 50 per cent in two years, is to look at measures that are stronger but temporary, because the principal element we have to do is restore the habitat,” he said in a phone interview.

Forcier said no wolves have yet been shot, and they will be left alone as long as they don't threaten the herd. Overall, he believes no more than a dozen wolves will need to be killed.

The plan has drawn criticism from both environmentalists and members of the public. A petition denouncing the plan to shoot the wolves currently had amassed more than 9,000 signatures by Wednesday.

Rachel Plotkin, a caribou expert who works with the David Suzuki Foundation, says predator control is a popular management practice employed by provinces “that don't have the political will to do the habitat restoration and protection that is needed to recover caribou populations.”

She said that while wolves are indeed killing caribou, that's because of human activity that has destroyed the old-growth forests that protect them.

“Predator control is just a band-aid measure that further degrades ecosystems,” she said. “Predators and their prey have co-evolved for thousands of years, and they're not the reason the caribou is declining.”

Plotkin notes that the federal government's caribou management plan found that caribou herds need a minimum of 65 per cent of their range left undisturbed if they're to have any reasonable chance of survival. The Charlevoix herd's habitat has only 20 per cent.

Both environmentalists and the government agree that habitat preservation is crucial to the survival of the caribou, which are especially sensitive to human interference and depend on thick, old-growth forests to shield them from predators and provide the lichen they eat.

Those same old-growth forests are prized by the forestry industry, and Forcier acknowledged that finding a balance between economic growth and conservation is a challenge. But he said the government is limiting development on important lands and will take even stronger action in a caribou restoration plan to be unveiled in 2022.

Henri Jacob, the head of environmental advocacy group Action Boreale, feels the provincial government's actions show it has no intention of helping caribou. He points out that the promised action plan will only be implemented at the end of the current government's mandate.

“In other words, for their whole mandate they'll do nothing to protect the caribou,” he said.

He also criticized the province's decision, announced this week, to remove protection for some 460 square kilometres of woods in the Saguenay-Lac-St-Jean region, which had been previously designated protected caribou habitat.

Forcier said the decision was made mostly because no caribou had been seen in the area in several years, but Jacob doesn't buy that. He says that it's normal for caribou to leave an area for a few years after grazing there, to allow the lichen and moss to grow back.

He said that while predator management can sometimes be part of a temporary preservation strategy, it serves no purpose if it is not paired with serious effort to preserve habitat.

“When you want to make a cake, if you only put in flour, you won't have a cake,” he said.

This report by The Canadian Press was first published Dec 11, 2019

A caribou grazes on Baffin Island in a 2008 file photo. THE CANADIAN PRESS/AP-Kike Calvo via AP Images